I was really nice today. Yeah, yeah, you say.

As J and I went to a new park for an unsuccessful round of fishing, we saw a girl by the road waving a sign, FREE STUFF!

I am not a yard sale type. I spend too much and have no place to put it all, so I don't allow myself to go.

On our way back home, much of the stuff was still there, but the girl and the moving van were gone. I'd been eyeing the pair of pool chairs, the faux metal kind that look fancy, but are incredibly light.

So I stopped. The chairs fit in the car. They need cushions, but I can deal with having some chairs we can leave outside. If they get stolen (as I unfortunately live along a stealing pipeline machine leading to the next neighborhood over), I won't be out anything.

After I got the car configured to hold the chairs, I went back to look at something else I'd seen. Baby stuff. You full and well know how I would ignore all that crap. Jeez, I don't need indoor or outdoor baby swings, much like those cheap vases and orange trash can nearby.

But I saw this:

How cute! J could pull that infant around in the snow. J would have so much fun with it.

So I cleared it with him, then hoisted it in my little car, too. Once home, we thoughtfully cleaned it with Chlorox wipes out in the yard. When ex came to pick up J for the weekend only minutes later, I could see the surprise in his eyes. I explained that it was free and that J would enjoy using it.

Thirteen DVDs on the half shell


Get the Thursday Thirteen code here!

The purpose of the meme is to get to know everyone who participates a little bit better every Thursday. Visiting fellow Thirteeners is encouraged! If you participate, leave the link to your Thirteen in others comments. ItÂ’s easy, and fun! Be sure to update your Thirteen with links that are left for you, as well! I will link to everyone who participates and leaves a link to their 13 things. Trackbacks, pings, comment links accepted!

J made this at school today. It is charming. 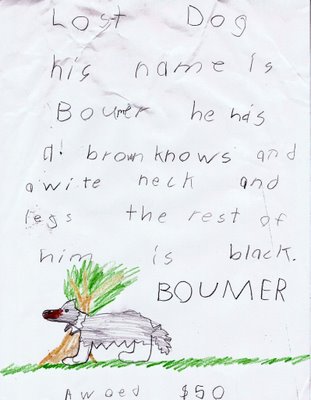 The man who found him lives one street over, but it's a very long block to get there. He was driving along, almost hit Boumer, then got out to talk to him and Boumer hopped right in his truck. Ironically, the guy does Sheltie rescue and was responsible for the other lost Sheltie sign we'd seen in the grocery store.

J will never want to fly away again... Have you seen Boom Boom? 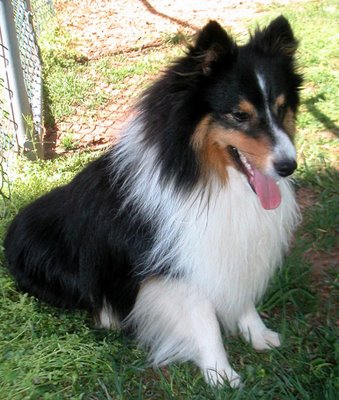 ETA: Thanks so much for everybody's concern.

We put out 25 color flyers this afternoon. We went to 4 vets' offices nearby, including his own. We posted a couple in the nearest pet stores. We put some in shopping center. A lot went out on the road their street comes off of, then some went in the neighborhood near their house.

Ex is very grateful for me doing this. Boomer's special to me, too, so it's the least I can do.

Funny, as we were out, J commented that he's glad I'm doing this, because he knows his dad would never do it. I guess I've earned me some much needed brownie points. When I told ex J's opinion, he said J's earned himself a future konk on the head. (But J's right!)
So Churped the Cricket at 6/19/2006 08:33:00 AM 6 churps back

Dear NetFlix,
I have little life right now, but I'm trying hard to carve myself a place. I conscientiously plan for Wednesday night visitations like tonight and the bi-monthly/upcoming long, lonely weekend. Occupying myself at a price I can tolerate involves your service. I truly depend on you to help me make my life better. And to deliver a sweet slice of Jason Lee for my personal enjoyment and viewing pleasure in the privacy of my own home. Please devise a better way for Jason to arrive, not all cracked and shattered. He wasn't happy about it and it was traumatic for me to see him that way.
I look forward to receiving Mumford at your earliest convenience. And that better be pretty fucking soon.
Most sincerely,
Cricket Cricketson
PS - USPS received a similar letter, as I realize you are co-conspirators in the blemishing of the perfect Jason.

Another Thursday, Another Thirteen

Get the Thursday Thirteen code here.


The purpose of the meme is to get to know everyone who participates a little bit better every Thursday. Visiting fellow Thirteeners is encouraged! If you participate, leave the link to your Thirteen in others comments. It’s easy, and fun! Be sure to update your Thirteen with links that are left for you, as well! I will link to everyone who participates and leaves a link to their 13 things. Trackbacks, pings, comment links accepted!

I thank you so much for visiting and commenting, but I must ask something for the first time in almost two years of blogging. I've seen others make similar requests on their blogs concerning the nature of comments, but I never expected to feel so strongly so as to do the same here with readers I sincerely care about.

For perspective, please consider this happening with P as being akin to a miscarriage. Perhaps I knew there were congenital defects, perhaps things weren't perfect or going as planned, perhaps I suspected it was ending, or perhaps I even chose to end it, but it still hurts and I must mourn, question, rage, bargain, cry. I am not happy it's over even if there is heard a collective sigh of relief. It does not feel like the loss was for the best. Rest assured, I am not relaxing either.

Further, I do not wish for another baby. I do not even wish to be pregnant again. I wanted this one to be perfect, to be the right one. I am not ready to even consider a next. There is no next. There is no readiness. I don't want to move on.

I need to examine and maybe validate two and a half years of my life and waning fertility. I should not default that it was all for naught, that it was all troubled. It wasn't. I was quite flip and angry here when referencing him sometimes. I needed the outlet so it didn't spill over to him. Obviously I successfully contained that around him in trying to make things work, because I truly cared for him, loved him, and even felt the desire to nurture him to the point that I thought it would be best psychologically for him if he broke up with me. That takes a lot of heart, but my heart is wounded and bleeding, in need of care. There were many good things about him that I don't think I'd be able to find again. I had never felt such acceptance in all my life.

I thought my grief was more clear in my last post. I said repeatedly that I am floundering and I have been for months, drastically so. I need to go through all the stages of grief and not worry about comments concerning redirection or finding another. I don't want judgments any worse than I can already pin on things myself in my veil of tears.

Please respect that even if you don't understand it, dear readers.

Further evidence is brought to light

[ETA Note: the videos don't come up on Bloglines. Visit Churp, Churp. It's worth it.]

In my continuing multi-media quest, I introduce additional Jason Lee sitings. He dropped out of HS to become a professional skateboarder, which he did for seven years, finally giving it up for the acting gig.

Now I've seen it. He makes me laugh.

Here are more video links.
Fear of birds - see it for Ethan Suplee, too
Stolen Car and One Legged Girl
A Couple at TV Guide: a summary that is good and clarified stuff for me, a Golden Globes interview with Melissa Rivers where she actually shakes his hand (Yikes!), and Jaime Pressley getting the same treatment.

And a Mad TV take of with Jaime Pressley: My Name is Dubya

Your name is what?

I have developed a sideline hobby of late. NetFlix is to blame.

and, really, who could see beyond the beeeauuuutiful Billy Crud-Who-Leaves-His-Pregnant-Girlfriend, but I am getting a bit anachronistic on that judgment.

And this beaut, well, he was overshadowed, in part because of his crazed character:

and I was Cruddy blind.

(However, be still my heart with these two together!)

With NetFlix as my vehicle, I decided to re/visit some Kevin Smith classics. I had not seen Clerks, but I had seen Dogma in the theater. Now I have seen Clerks (even before Clerks II comes out!) and the other over-the-top edited out final scene where he gets shot, sorry, but I liked the irony. Didn't lend itself for a 2, though.

Then I got Chasing Amy.

If anything, it reinforced that I am not a Joey Lauren Adams fan. I don't like the way her voice hovers around a screech or the way her face purses up or any of the rest of her body language. Yuck. There was one very good thing that caught my eye in that movie, tho:

And it reminded me that I witnessed his explosiveness in Almost Famous.

So I got Mallrats. I agree it is a classic. I love the variable clean-ish-shaven Banky:

I am now a Jason Lee fan.

Enough for me to actually want to see a Tom Cruise movie in order to see him again:

So, what's up with this guy?

I am guessing this is Earl. I don't watch TV, except at P's and I haven't been there since before, um, Xmas. I remember seeing previews, not the show. It got nominated for both Golden Globe and SAG awards this year.

Is the show good? Have you seen it? Does it make Jason Lee, in some existential ethereal way, look good?