Yeah, really. They were dried crickets slathered in seasonings. Could have chosen a couple other flavors, too, like BBQ or cinnamon.

I could not eat my kind, but Lyd didn't know they were my kind! She ate the whole bag. 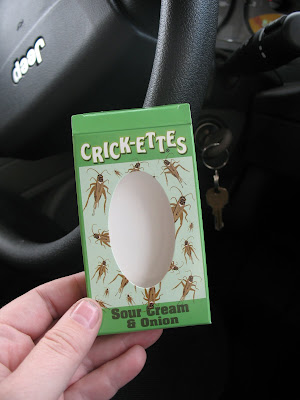 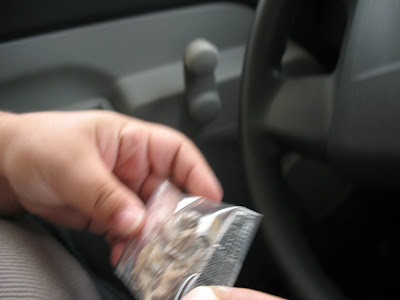 I'm actually the optimistic sort, expecting the best to happen, figuring I'll learn and apply what I learned.

In my lapse of not reading Bloglines for a while ( I still have some of you to go), the dreaded pregnancy/new baby folder swelled to over 500 entries. In an act of courage and stupidity, I decided to tackle it.

Approximately every other blog was pregnant or had a brand new baby. I'm not even exaggerating. The shear numbers were completely unexpected. Operating in mistaken self-preseveration, I kept thinking, "No, this next one couldn't be," but it was.

I didn't understand, because most were in that folder because they (generally) got treatment to get pregnant in the first place and then they got their miracle baby allotment. Now they're working on bonuses.

Most days, I am fine being an over the hill infertile. In my life day to day, it rarely rears its head. I can talk to baby people just fine. However, the blog version of this scenario just isn't working for me. Although they couldn't really care less about me as a reader or an unfortunate individual, it feels cruel to learn how truly easy it becomes for some, how they cross back over that fence to stay. It feels like they weren't really infertile, that we were all fooled for a time.

Of course, I don't really believe these things, nor do I think an infertile's pregnancy is directed at my tender psyche, but it sure feels that way as I read entry after entry in a folder of infertiles, who rolled surprise pregnancies in Las Vegas or in their own damn bedrooms.

I wish I'd been so lucky. Reading that folder was overwhelming and it opened old wounds. I wish them all well, but mostly I wished myself well, too, but came up short. I don't think I will force myself to read that folder again. I really learned this time.
So Churped the Cricket at 1/17/2009 07:06:00 PM 5 churps back

That song by Todd Rundgren is my favorite ever.

I love his freaky eyebrows. He looks similarly in other videos. Not sure if that's his thing or if he's a victim of his times. There are different interpretations of the lyrics, but he sounds contrite, yet hopeful, as if he knows it's over, doesn't want it to be, and he'll take what he can get. Before reading the link, I didn't know it was written as if on the telephone.

Today is better than yesterday. After I got the lithium, I was pretty together as soon as it hit my system. I was wiped out this morning, though. Had a hard time getting up, after many snoozes, and I figure it's related.

It's a bad day for stress, as in my fog of late, I did not deposit my support check from ex from the beginning of the month. He inquired yesterday, then kindly dropped another check off this morning. I need to make it to the bank. I am very nervous.

I am much too quasi about finances. It taxes my brain and drains me. It's like I can only be together about one thing at a time and being good about finances would mean I would not have the energy for anything else. Ex said I was a bad business partner; it's true. It needs to be somebody else's job.

I look at energy as a measured quantity. I despise when something extraneous steals energy. You don't know how often I want to use the expression, "I don't chew my cud twice."

Still no news from the art center about the judging. I emailed with the other artist going through it and she says she plans to give her a week. She said something about being scared about getting in. I don't fear that as much as I just want to know one way or the other.
So Churped the Cricket at 1/13/2009 09:22:00 AM 1 churps back

I think of posting often. Just like I just read on another blogger, I get stymied. I figure that if I'm blogging often, I can just drop in for a quickie. After an absence, though, I need a slow, comfortable entry. A quickie rant might suit, but it isn't quite respectful.

No, I'm not talking about sex.

At present, I believe I'm going through lithium withdrawals. This happens a day or two after I run out. I have run out b/c I was out of refills. Of course, I had a script in my purse, but I forgot, so the pharmacy must go through the deal to call the doctor.

I was also out of my cholesterol med; my cholesterol is down to 184 because of it this last year and a half. The pharmacy called me today and said I'm no longer a patient with my GP, so he can't refill it. I gave up on getting into my first GP after a couple years, then deferred to going to this guy the last, oh, say, five years. I saw where the first doctor was going to some pre-pay plan, but never saw where my doctor was going. I figured the practice was splitting up. Apparently this occurred last May, however, I KNOW that since last May they have done a refill renewal on something. The office wench told me today that I had not been there since October 07, so there wasn't possibly a thing he could do for me. I asked her if I was supposed to feign sickness in order to have two mild, chronic illnesses treated - cholesterol and asthma - and clog their appointment system for nothing.

So I got a referral to another doctor, an expense I am conscious of during a very lean month. Of course, they can't have my records on such short notice, so I can't combine trips on the 10 miles up there an back to my appt Thursday. And they want me to drop off something in writing, not give something in writing when I pick it up. So this will be three trips for a total of 60+ miles. AND I'M NOT EVEN FUCKING SICK!

Add to these series of phone calls the friendly county water checker guy came by and asked me to turn off my water so he could check for leaks. There'd been a complaint about water on the sidewalk. Obviously, the person hasn't been here long, as it is like this every winter BECAUSE OF THE FUCKING POOR DRAINAGE THAT THE SEWER ARM OF THE FUCKING COUNTY WON'T CORRECT. Sheesh.

Back to the lithium withdrawals. Before Gianna, I thought I would get whacked from bpd mental illness the instant I came off of lithium, that there must be some huge rebound effect. Because of this impatience/crankiness/mania, I am religiously good about refills. This time, there was the extra kink, tough. Anyway, Gianna showed me the light that it isn't my mental illness kicking in, it is withdrawals. It happens the same way each time I'm off for a few days. It is withdrawals. I am not an extra dose of crazy. However, I don't want to come off; I otherwise tolerate it just fine.

Otherwise, things are going well. I am waiting to hear if I was juried into the art center. Was supposed to hear Friday, so it's really working on me. Cool thing is that I'm now hanging, well, you know what I mean, in a gallery and in a government building. This week, I'll be adding a senior center and in a few weeks there will be a coffee/pastry shop, too.

Winter is killing me, because I want so badly to paint outside. Because of the bad lot of paper I got, the fall wasn't as fruitful as I'd hoped. So I am TRYING to paint from pictures I took of CA over Thanksgiving. And I am going to take a class beginning on Wednesday. I want to support the new art center and I am thrilled that they are offering pastel classes, but I'm sad that the classes don't go. The one I'm taking isn't the one I wanted to, but the other two didn't go. This one is with my old pastel teacher who drove me crazy - would not show up prepared for class, talked about people's grandchildren instead of instructing, no demos, no critiques, wanted to pick up pastels to work on your piece instead of being able to tell you what to do...

Nationally recognized and winner of shows, she was my first pastel teacher four years ago and I took her on/off for about 1.5 years until I began working outside almost exclusively. It has been awkward when I see her at various meetings, as I really do feel like she held out on important details concerning my questions years ago about the business of art - photographing works, joining societies, exhibiting, etc - sort of like she was trying to keep me in a certain place. It took me longer, perhaps, but I am in a good place nonetheless. We get along just fine as people, just not as artists or instructor/pupil. It's a very good thing that I have therapy directly after her class!

Okay, there are much, much worse things in the world than I've described. It's basically going well. Today is not good, but it should be better tomorrow once I make it to the pharmacy.