Lesson for the day: 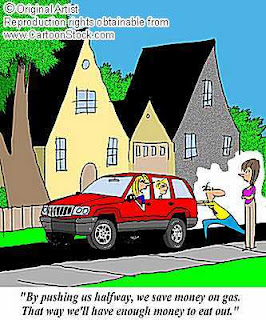 A number of days ago, the tire symbol came up on my car. I fiddled with trying to check and fix the air pressure, but knew I was doing more harm than good, so yesterday I made an appointment for today at the dealership - thank goodness it was under warranty. Turns out, there was a nail in a tire. It was small enough that they could patch it, but I didn't feel good with a tire like that going on our trip next week. All the tires were 3-4/32 tread remaining, so it was time for new tires anyway. I knew it was coming, just not this soon.
The dealership gave a quote of over $650, but lovely Lyd called around on my behalf to Cos.tco and Wally's, finding the same for under $450. Tomorrow, I plan to drop the car off at Wally's (they had five of the proper tires at 1:30 today and I hope they have four left at 10am tomorrow), then walk over to my 11am haircutting appointment.
While at the dealership, I made the appt for my 25K check up, which is $200 and will be in 10 days. They asked a number of different times if I'd rather do it today while they had the car up, but I declined. Last time, I was 20600 and I am only at 24100, so I still have a few miles to go in their 5000 mile cycles. I'll do probably 700 in the next 10 days and I'll feel like I got my money's worth. Then I can take J and Norma's son to their violin camp throughout July without having a car maintenance conflict.
I feel like I am hemorrhaging money these days. That check up, plus tires, is the same cost as tickets to fly to CA in August. I cannot decide if I can just do it all. At least once in CA, lodging and transportation will be covered by Lyd, so it'd be a relatively cheap trip overall. I asked her today about doing some white water rafting and she's game. The place nearest her allows kids of J's age to go, too, but he's the stumbling block, the big chicken who will only ride rides that are for kids younger than he at the theme park. Anyway, that'll cost over $100 each, but it is such a thrilling thing to try. None of the three of us has done it before.
Say CA and my son has googly stars in his eyes. The main thing he wants to see is Hollywood. Go figure. I blame the Dis.ney Channel.
In the mean time, we may see Pearl Jam coming up, with J in tow and I'm not sure that's a good idea - plus it adds up to about a plane ticket. If not that, then we'll see Melissa Ethe.ridge, us two. I would definitely consider myself eligible for my Les.bian Card then. Either way, I'm letting Lyd decide.
She's talking about limiting her travel once here in order to save some for J and I to come to CA in August. I'm trying to not let her do that, but she is such a generous thing.
I need a fairy godmother to support this habit.
So Churped the Cricket at 6/12/2008 05:59:00 PM

I'd love to see Pearl Jam live, I think it would be a fun show to see.

I'm totally with you on the hemorraging money thing. Seems that every time I turn I'm owing someone else money.

Pearl Jam was one of those bands that made my bad list in a hurry. While all the other Seattle bands were really good, I never got into Pearl Jam...I think it had to do with Eddie Vedder and his never closing, let's be controversial all the time mouth.

650 for tires is wayyyyy expensive...good call on going the other route.

the actual town of Hollywood is a slum...seriously...

People don't know that in general. I suppose there are a few tourist attractions though that would distract from the reality.

We're going to Cali for vacation too. But we'll be in Northern California.

I've always wanted to see Pearl Jam. To my understanding, their shows are relatively calm. Ok, so my perspective on that may be a bit skewed, but I've heard that Eddie's calmed down quite a bit as far as jumping into the crowd and what not. I'd probably take the boy to see them, if I ever had the chance.