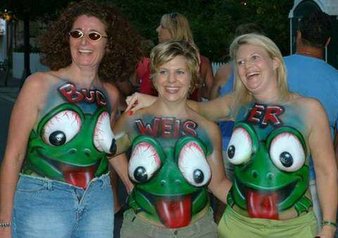 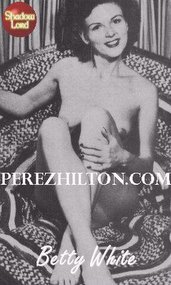 My observant readers, do you notice anything about these ladies?

Bud and Betty have something in common: hypoplastic (but not too bad as there is some breast tissue), tubular / tuberose breasts. Betty still has yourthful pert cones in these pictures, while Bud's have fallen a bit. Notice the full, puffy nipples.

Look at the short, flattened fold under the constricted breast of Bud vs. the nice, long semi-circle of Er. It is interesting and telling viewing the differences next to each other, bug eyes aside.

I applaude them all and appreciate them for assisting with this valuable teaching tool.

Hey! World! Tubular breasts are pictured online and it's not even at a plastic surgery site!

Thanks to Perez Hilton for posting Betty... and for thinking she's hot. Plus kidos to my mother for sending me titty shots, even if she didn't know the full meaning.
So Churped the Cricket at 2/28/2006 11:07:00 AM 2 churps back

Flix in the mail

Finally reaching the new millenium, I just joined NetF1ix last week. They suggest you put up to 10 in your Queue for starters.

We've received 2 movies already with speedy viewing and return mail services as well as a handy distribution center in the area, however, I have 126 in my queue waiting to visit us. 126! There are more than 126 movies I want to view in the comfort of my home. Mind boggling.

I did the one-at-a-time membership version, b/c I'm so prone to losing stuff, but I figure I/we can watch 2-3/wk. The holiday Monday threw us with shipping, damn. In terms I don't quite grasp completely, the anticipated movie schedule would last me an entire pregnancy on bedrest before I'd have to order again. Lucky girl, I am.

It is astonishing to me how many movies I want to see and how many of them are with 4-5 stars. There's only about one or two with a borderline hazy, not-quite-complete 3 stars.

I made myself choose movies I hadn't seen before, except I made a solitary exception. I want to see Napoleon Dynamite one more time. And I want my son to see most of it. He's good at covering his eyes when I tell him to.

How does one spend President's Day when stuck at home with a kid out of school? To me, that means taking a nap or something. To Kid, that means coming through on the trip to Chuck E. Ch33se I've been putting off for a few months and to see all the other crazed fools out of school, too, competing for seating and places on the games.

I'm good on my word, but I made him work for it. I'll post more of the juicy details later, but his next school project is due in a week and he has much practicing to do. He had to run through the whole talk twice before going and once there, I would only give him 10 tokens at a time, then he'd have to come back to do parts of his speech. What a system! It actually worked and made the whole ordeal less an ordeal. Three hours felt like, say, two!

I'd hope for the ever-requested gifts (a picture of J and I together) for the grandparents to work out for a mere token each, but I should have known it was too good to be true. That cheap ass printer spoiled my gift to my mother, but she'll get it this way anyhow. And appreciate it, dammit.
So Churped the Cricket at 2/20/2006 08:22:00 PM 6 churps back

At 43, Elizabeth Varg4s is expecting her second child. The first is 3 years old. ABC is worried about running out of anchors, given the injuries of Varg4s' co-host, B0b W00druff.

With her just taking over the co-anchoring job last month, one would think that this pregnancy is not IVF-induced.

Is Liz Hurley pregnant?
British model/actress Elizabeth Hurley has been spotted leaving an antenatal clinic in London, sparking rumours that she is expecting baby number two.
.
Liz admitted recently that her boyfriend of three years, Arun Nayar is desperate for a child of his own and that they would be working on that very soon. The Estee Lauder model is already mother to three-year-old son Damian Charles, whose father is Hollywood producer Steve Bing.

Liz's DOB is b. 10 Jun 1965, so she's turning 41 this year. In medical terms, she's possibly already 41 b/c of her potential EDD. I wish stories of this would inspire me more than depress me.

I'm curious about the British definition of "an antenatal clinic" and whether that would be:

Maybe she was just going for her annual pap?

[Do you think I read too many of the gossip blogs perhaps?]

Continuing on a perplexing theme

In the comments of my recent post about personal ethics and health care workers, DD said...

Unfortunately, this is all perpetuated by privately funded and owned corps. For example, just in my little town when there were 2 hospitals, if you wanted a tubal after giving birth, you could not go to Hospital A as they were owned by the Catholics, who of course don't believe in birth control.

I've been thinking about the hospital thing and religion. It made me pause; DD is right, but it isn't the whole picture. Catholic hospitals are one situation that have always been that way, selective about what care they provide. It is pretty clear to anybody that one isn't going to receive birth control from a Catholic hospital; there are probably other restrictions, too. A patient is potentially going to encounter rather prudish thought processes, but the hospital is relatively clear about their intent merely by their affiliation and reputation. That, if nothing else, is fair.

The sneakiness of the Right is that they don't have a big "I'm of the mentality of a Catholic hospital" sign across their forehead. It is clandestine. One doesn't go into a pharmacy expecting to be balked by a pharmacist, adding insult to injury in the nut roll of trying to find another pharmacist or pharmacy. If they advertised "We are a Christian pharmacy" or "We only cart heterosexual Christians in our ambulance service," it would be fair and the rest of us would know who to avoid. And those who prefer such could.

The frustrating and alarming thing is that, as it stands outside the world of a Catholic hospital, we don't know who to avoid until it is potentially too late.

Warning labels! We should hook up these legislators in 18 of our states with the Surgeon General and the FDA to cook up some appropriate warning labels.

Warning! Religion can cause mushiness of the brain.

Beware pregnant women! With the Right, once pregnant, always pregnant.