Sometimes I suck as a Mom 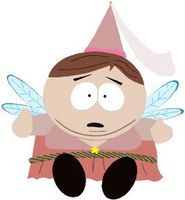 With J, I am amazingly lucky regarding several things: he is rather naive and can be easily foiled.

For example, at Xmas I muttered (lifelong insomnia means I take meds each night and they can kick in without a lot of notice) to P that he needed to put out the bag of Santa Claus stuff when he got up to pee at 3am, but P didn't hear me in my drug-induced pre-slumber jargon. On Xmas morn, J came to our room and declared, "Santa forgot to come!" Ahhh, what a great way to start the morning. I hustled him out with P distracting him, telling my son that Santa just left them by the door this time b/c P doesn't have a fireplace. (It embarrasses me to lie to my son!)

That snafu followed a similar incident whereby I missed out on a Tooth Fairy opportunity a few months before. I forgot and J got no bucks, the pathetic tooth and baggie remaining beneath his tears-soaked pillow. To my credit, I remembered to do the deed the next night. 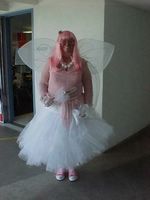 Thankfully, he swallowed the next one he lost and I just handed him the dollar rather than risk the alternative. The one after that, he lost at his dad's, so I was gloriously off the hook.

Over this past weekend, he quickly developed a very loose tooth; it sort of sped past another semi-loose one he's had for months. He spent Sunday with his dad and I so much wanted the tooth to be gone when I got him back. No such luck.

Loose teeth are a big deal for J in particular. The kid is mighty slow when it comes to teeth. He didn't get his first tooth until he was 11.5 months old. (If you haven't braved such, most kids have a tooth or four by the time they're 6 months old.) I think this made for a much happier baby; he rarely cried b/c he wasn't teething all the time. For his present count, this was only his 5th tooth lost. It has been over six months since the last one came out, so he had no cutie pie gaps anymore.

Nowadays, his friends have all lost the 8 front teeth and are working on the incisors. With him being a year older than many, this is particularly telling. In fact, the dentist was so surprised about J's mouth on Monday, he snatched out J's previous x-rays to make sure there are teeth in there.

B/c I knew my non-risk-taking son would not yank out his own tooth, I loved the timing of the dental check up on Monday afternoon. I was so glad for the opportunity to hand it over to professionals. However, within a minute of us leaving for the dentist, the tooth dropped out on its own. No blood. No pain. Very cooperative, indeed.

Yeah, except it went in a baggie and in a kitchen drawer to be forgotten in the rush to leave for the dentist's. J got up this morning, asking about his tooth. Mean mom that I am, I told him that it's his responsibility to make sure the tooth gets under his pillow.

I wish I could find the cute pillow like this that my sister x-stitched for J. It hangs on the door and would make life easier. 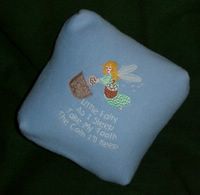 So when the tooth and baggie resurfaced this evening, I immediately made a twin baggie with a dollar in it and stuffed it in my pocket where it waits.

In closing, I must thank you for reading, keeping me awake and focused, so I can actually do my motherly job properly tonight.

Then I can dream about getting it on with this spirited guy....
Tooth Fairy Freak 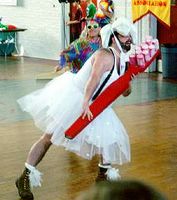 you should totally give your kid some of your sleep meds because if he wakes up to you in that outfit you are gonna scare the ever loving shit out of him! hahahahaha :) have fun!

What...is going on with those tooth fairies??

Nita, that's another thing I get over on - he's a great sleeper, always has been. You should SEE the stuff I prance around wearing after he goes to sleep! ;}

Oro, I googled a search figuring I'd use some cutsie cartoon fairy pics, but the pickings were so good, I had to use more. The fairy guy was from a website about some Groundhog Day celebration. I personally don't get the connection, but I applaud all who do.

I looked again quickly. Need to look again again for the fairy freak and the Groundhog Day thing.

Meanwhile, this fairy freak is even freakier.
http://www.atlantajugglers.org/images/gh2002/06%20tooth%20fairy.jpg

My daughter thinks you are supossed to put your tooth in a glass of water for the tooth fairy. Do you know how gross it is sticking your hand in a cup of water to fish out a bloody tooth?

Okay, Michelle, can you say "second glass"? Substitute, chick! Join the ranks of bad moms like me!

Does the loot go in the glass, too?

My oldest (now 6) figured out Santa a year ago ... but he still believes in the tooth fairy. So much so that he lost a tooth, *didn't tell me*, and left it under his pillow. Thank goodness he mentioned it to Dad at bedtime ...

I remember one year I forgot about getting the tooth. Probably my most brilliant ad lib was , to kid who always has to sleep with a fan...the tooth fairy tried to come, but your fan kept blowing her back so she couldn't leave the money. She came to our room and asked us to to give the money.