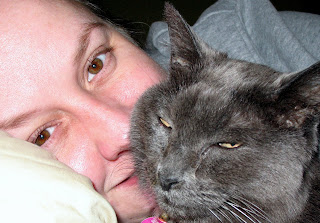 My cat is propped up on my arm like she always sleeps. My right arm is in a permanent state of ache from making sure she's warm and comfortable. She's worth it. Taken with my new Canon A630! (I sent it to my mother and she said to go put on some make up, I look too much like her here.)

Kitty went to the vet yesterday morning. We went mainly because she was out of her K gel and her kidney medicine, benazapril. She had begun to lose weight in December, but as it turns out, she still weighs almost 5lbs, so not too far off the mark for her slight frame.

I didn't expect to question whether I'd ever be able to take her home again, however. The vet, one I had not seen before, did a very thorough exam on her. It'd been almost a year since I'd taken her in and over a year and a half since she was diagnosed with renal insufficiency/renal failure. The vet discovered that Kitty now has a heart murmur. I could elect to take her to a cardiologist for $500 to see how extensive her heart disease is, but I won't.

The vet said she feared beginning subcutaneous fluids for her, my other goal for the day. Balancing the delivery of subcutaneous fluids for renal failure and taking care of the heart is a delicate science. She feared that if we gave her a full 25mL of IV, her heart would fail. She said they could probably save her with a med, but it would be a cyclical situation. The way I figure it, if they got her heart failure under control with a med, then I would not worry about fluids again and I would let her go more naturally.

I truly hate the thought of an intervention being the cause of her death. Kitty got a sample 10mL to demonstrate to me how to do it and she did fine with that, although she did not like the cold.

The vet made mention about her quality of life right now and if it gets worse, I need to consider putting her down. She based this on Kitty's coat, which she stopped grooming perhaps 2-3 years ago, and stated confidently that Kitty feels badly. I think her evaluation is rather extreme, as I'd already made it clear that Kitty eats, drinks, climbs stairs, jumps on the bed, desk, and purrs etc daily. Even in renal failure, she is a vital and functioning part of our family who is holding her own.

I will let her go when it's time, but it's not time yet. Later today, I should get the results of her chemistry panels. I do not expect good news, but I will find out from her regular vet, who I don't really feel like I know or trust either, about the delivery of subcutaneous fluids and her opinion on that and heart disease.

God, I love this cat. She is such good company. I will be spending a lot of time in bed cuddling her and enjoying her before she goes, but I will not write her off in the mean time. Her loyalty deserves better than that from us.

ETA: the vet left me a message this afternooon - kind of like she did a year ago when she said the cat had progressed to renal failure - it's what makes me not trust her - I do not like such messages left on my phone.

Anyway, supposedly her renal numbers have stayed the same. I remember they were high enough to be considered renal failure (vs. insufficincy), yet they weren't off the charts.

Her concern now, however, is that the liver numbers show problems. She said she'd usually order an u/s, etc but won't b/c I'm poor. Honestly, this is one old cat. I don't know what paying for an u/s would really provide. This is the same vet who wanted me to have $70/month renal bloodwork done for monitoring purposes. Now really, what good is knowledge like that? I don't see a reason to throw away money on useless data. This is one old, yet happy, cat.

I am not in the mood to return her call now, but I'll talk to her tomorrow and go by there for a copy of the bloodwork. She wanted to bump up the subcutaneous fluids from 25mL every other day to daily. I kinda don't get it with the heart concern.

Val, Sweetie, I honestly didn't think about you piping up, but I appreciate your input. I'll have more details tomorrow.

PS - I called P this morning at work. We talked 20 minutes, until I had to get off the phone for biofeedback. Much more tomorrow. But, munch on this. Shancy didn't know P was still seeing me. He was cheating on the BOTH of us. And he is sweating and scared. Just where I want him.

Quickie treatment plan: Benazepril, potassium supplement, renal diet, 1/2 baby aspirin daily, lots of love!!!
Tell me her creatinine (when you get her blood chemistry results) & I'll tell you whether it's worth the risk to give SQ fluids...
Sure, it would be cool to look at her heart & see EXACTLY what's going wrong, but as far as changing her basic care??? probably not much difference...
(back to see my patients now!)

You know best for your animal. My beloved black lab is alert and happy - still wants to play, eat, go for walks even at 13+ years. I figure he'll let me know when he's tired of living.

If you remember, Mr. DD had to make that decision on his own as well. I knew what had to be done, but unless he knew it was time, he'd always resent my input.

Interesting about P. What an idiot.