I feel so bad about the phone calls.

Unexpectedly, ex called twice around 10pm last night. I was downstairs watching TV and didn't hear the phone. Sometimes the electric plug on the fax downstairs wiggles loose and the fax phone doesn't ring. Exasperated, J brought the upstairs phone down, complaining that it had rung two different times. I told him it was his dad. That kid. He will not answer the telephone. His phone phobia even tops mine.

We didn't anticipate the evening attempt, but I decided to be super prepared for the morning one. I told J to sleep with the phone. When it rang at 8:20am, I found his bed was empty except for the phone, which I unfortunately caught just after the last ring. I discovered him on the couch downstairs where he'd gone at 7am. We had a talk about him and follow through. I know it is hard for ex to get phone access and work with the time difference. 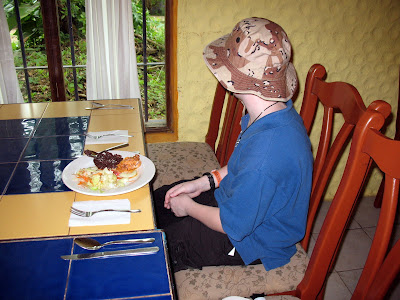 Cruising attitude: He was being an unhappy asshole, looking the other way.
The boy is frustrating the bejesus out of me. It's not new with his dad leaving. With bold intensity Monday and Tuesday, plus many misc other times, he came home pissy from school. Monday, he wanted to go play and Tuesday it was practice violins with the Bangladeshi neighbors for their upcoming concert. Tuesday, when quizzed repeatedly about the attitude problem, he said it was school, but he would not elaborate and has since recanted. He was so maligned on Monday, I told him he was grounded for two weeks - no playing outside, no TV, no computers. (I know it was overkill, but I am so frustrated.) He could practice violin (at home), do homework, and do Scouting requirements.

I have never come down so hard on him, but he was being such a butthead. On Monday, he was balking about doing Scout badges with me, something I/we made into a weekly event. Last time, he liked it, even though he predicted it would be boring. He even knocked out a bunch of requirements with our trip doing things like packing his bag and mapping our way to the airport. We've already finished about four and are on line to finish another four - real progress.

He claims I am doing it for me. The main problem, to me, is that ex didn't do this at all, so the routine is new. He was the parent in charge of Scouting, but he did nothing more than take him to meetings. He didn't work on the other badges necessary for promotion. He put no personal structure on it. In fact, he complained bitterly that the timing between him getting J after work and Scouts beginning was too long (and traffic too bad for him to make it home), that Scouts should meet earlier, yet he didn't use those two hours each week to knock out some badges.

Now it falls to me and J is resenting my Forced Death March approach. Actually, I am trying to make it as painless as possible. Unlike his father and I when we were kids, J does not pour over his Scout book looking for his next badge to earn. We've tried to get him to take initiative, but he won't. He reads well, but he just doesn't choose to read in general like his dad and I. To counter this, I pour over the Scout book and pick badges that he'd most enjoy. Then I choose the requirements that most suit his tastes, as it is common to do something like eight of 12 requirements from the top section and two of six on the bottom. I streamline the process so that all he has to do are the requirements, not having to weed anything out. But to his mild ADD/dyslexic mind, it's too much.

Perhaps you've mentally gone to the place that he doesn't really want to do Cub Scouts? That is the case sometimes. It's a preconceived notion thing and, once he's doing it, he's fine - a resistance to change that is part of his tested psychological make up from two years ago. Other times, he really does enjoy it. He's excited about our camp out coming in a few weeks. He does have some problems with some of the boys who have behavioral issues and should be monitored more closely by their parents. For a boy so frenzied after school sometimes, he sure appreciates when people behave correctly. At least with Boy Scouts on the horizon in a year, he'll be able to do more exciting things with them.

He played baseball for four years, but complained about that, too, yet once he got to the field, he usually did a good job. His dad and I insist upon him being in some organized activity and he hasn't come up with anything better than Scouts - he really isn't athletic and by his age all the teams are competitive with try outs etc. He does like the violin, but we feel he needs more. Violin is in school, although I am checking out a strings camp for a month in the summer. As it is, what about the rest of the day? He loves to play football and basketball with the neighbor boys. Goodness knows, he's not going to pick up a book and read for fun.

I really believe there can be some balance, but I can't reason with a he-banshee.

Ha ha ha haaaaaaaaa!
Sorry but I needed a good laugh...
Glad I'm not the only Scouting mom who feels like a muleskinner, whuppin' & urgin' her boy to finish "X" achievement!?!
Maybe bcz I'm Den leader (in all my spare time, yee-haw!), I tend to take a much more relaxed attitude about it: if we discussed it, we achieved it. I shovel a lot of the optional achievements onto the parents' plates which they can do or not as they please...
Is your pack signed on w/Scouttrack.com? if not, you oughta be; it makes it MUCH easier keeping track of things...

Our den leader tracks little. His wife says he thinks he has a better memory that he does; he doesn't maintain lists, doesn't give me any comfort. At our banquet, J was due 9 badges/pins. He got 8, but one was for something he didn't do, so we turned it back in and he's down to 7 to wear. Other boys had as many as 12 (out of 20 possible), but obviously their dads actually did something outside meetings.

It's a pride thing wearing the pins, plus now I work so damn hard getting J to earn the stuff, I sure would appreciate some organization on the den's end.

And this is just the badges - there are also belt loops and academic pins as options. I wish to goodness J cared more. I am going to try to slide some in, as diversions between the tougher, less interesting required badges.

Val, at least you understand. I sure appreciate that.

Welcome to the tweens. I dunno, really, every kid's different but I suspect that there's going to be quite a bit of power struggle for the next few years. TJ is a force of evil all unto herself. But I certainly feel your frustration.

We've never stayed involved in any organized activities for any length of time. Indian Princess (kind of like girl scouts, but a dad & daughter thing that Bob took her to) only lasted one school year. Piano lessons lasted for a couple of months. I refuse to do the stuff FOR her. Any time she's asked to join a group, I counter with "are you sure you want to commit to that, and will you follow through". Needless to say, she doesn't do groups.

Anyway...you're in the middle of a double whammy with J entering the tween/teen years plus his dad's deployment. Hormones + upheval/change = temporary insanity. You seem to be doing the right things, though, by providing as much continuity and stability as possible. Hope he lightens up soon.

Rrrgh. Sorry he's being a hee-yotch, if only for the time being-- and that he snaps out of it soon. I think it's inevitable that the parent who imposes ANY structure is seen, if only initially, as unreasonable and MEAN. And it's not any easier for you under the current circumstances. Hang in there.

Must be something in the air these days. My boys are both driving me bonkers.

I never got into scouting, even though my dad was a troupe leader. They never forced me to do anything I did not want to. By the way, I get the feeling the boy is only half into it and feels like dad is the only useful parent when it comes to it.

I don't know what's more powerful, my slight phone phobia or my public speaking discomfort. I think I'd rather talk on the phone to people at work rather than see them in person sometimes.