I do not like when people talk about dreams. They bore me. I never talk about my dreams.

Instead, I will talk about today's profound vision during biofeedback, namely Alpha.Theta Training. It was my 11th such session of this particular node, but number ten on Friday was an absolute wash. Looking at today's wave patterns and numbers, it would have been considered a wash, too, except it was the most amazing one ever.

The 30 minute training has an EEG electrode attached to the top/back of the head, a place referred to as the God Spot because of the spiritual reactions it elicits. I remember kind of rolling my eyes when I heard that one. Also, it is highly effective at making alcoholics alcoholic no longer and PTSD people calm. It is considered great at cultivating self awareness. Insert another eye roll, as I am Queen of Self Awareness and I am not alcoholic, although I would characterize myself as PTSD-ish in my reactions to stress.

Alpha waves are the higher ones when you relax; theta waves are higher as you relax further. Over the session, waves will change as to which is higher. At these crossovers, visions occur.

Enter the evil menace. I have had many crossovers, but I have not have the visions because a third wave, the high beta, is a minimizer. That, my friends, is brain chatter, what I do best. It is why I cannot fall asleep. My brain won't turn off enough to let me relax. And, even though I've had crossovers, my high beta inhibits the response.

Friday and even today, my high beta was even higher that the alpha or theta. Only a week before, I'd had beautiful lines of alpha and theta on the screen and a high beta low enough that they barely touched over the thirty minutes. I was so incredibly proud. I made my brain waves prettier.

Today, though, my high beta was above the others again, except for a very few moments. At that collision of waves, I had such a meaningful and moving vision.

I saw a cerulean blue sky dotted with small white clouds. Someone soared out of a little airplane as if skydiving, dove downward through the beautiful sky and skipped across a couple rooftops. At this point, I had a sense that it was me, but I didn't really look. The next skip took me to a trampoline where I jump, jump, jumped higher and higher. The point of focus shifted from the side to me looking upwards at the soles of shoes bounding up and up into the cerulean sky with the small white clouds, until they disappeared and all I could see was the sky. Slowly, superimposed upon that was this: 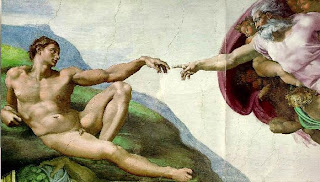 It faded gradually to the cerulean blue sky and small while clouds again.

I realized that art is my expression of God, of my interpretation of what is divine in this world, and I have neglected my very passion. I need to take better care of nurturing that part of me , which will begin with painting that cerulean blue sky with the small white clouds.
So Churped the Cricket at 2/12/2007 01:31:00 PM

Wow, I know a few people who would pay good money for "visions" like that. :-P

Very cool that you were finally able to have it work. Getting back to painting may be just the thing. I'd love to see what kind of stuff you're inspired to paint after your biofeedback sessions.

And I was just about to tell you one of my sicko dreams about you, sweetie. But, I'll keep it to myself if you prefer. Meanwhile, you know I'm the sympathetic type, but you've just got so much going on lately! I can't hardly focus, you know? Whew.