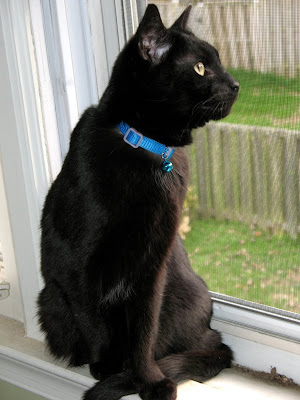 Memphie died over the weekend. He was the best cat, so gentle and affectionate.

He had a tumor in his abdomen which I first felt about a month ago. It was confirmed by the vet, who wanted to put him to sleep on the spot. I declined, as Memph as too much life in him. Up until the end, he jumped on top of the high kitchen cabinets. He was eating like the dickens, although his hips had carved out, while the tumor bulged like a pregnancy.

We went away Friday through Sunday and I knew I'd be putting him down this week. However, I returned on my birthday to find him dead on the floor.

He was such a sweet cat, he allowed me not have to take him in. Doing that with Sad.ie ranks among the hardest thing I've had to do as an adult.

J isn't home again yet from his dad's. At present, I have two dead cats in my freezer. This happening gives me the opportunity to no longer "wait" on ex to pay for Sad.ie's taxidermy, as it has been almost 2.5 years. They'll be buried together, which is fitting, as they were both incredible cats and I got him only 10 days after she died.

I'm sorry Cricket. It seems like just yesterday that you adopted Memph. Take it easy.

Oh that is so sad. My deepest sympathy goes out to you & J...

Sorry to hear about your cat. I'm glad your son wasn't with you when you found him.

Alexandria Quartet, I mean, not trilogy!

I remember a quote from Lawrence Durrell's "Alexandria" trilogy. He was talking about a man's brother, not a cat:

"Nothing avails our grief; Narouz is dead!"

Sorry about you and J's loss. Poor little Memph.

I am so sorry for you loss. I know how much you adore your cats. Hope J isn't too sad and that Sammy can offer some consolation. I know that you can never replace an old friend though. Hugs to you my friend.