The verdict is in

Braces sooner rather than later. Today's appointment was supposed to be preliminary, just to chart a plan to come back for more. They kept repeating to not be upset if this appointment today only led to another free consultation down the road.

J gets braces on the top beginning in early July and they'll be on a year, 4th grade. Then he'll have a retainer for about two years and the second phase will begin before the 7th grade, this being a regular mouth of braces once his baby teeth are gone. At least this way, the cost of the braces are going to be divided over many, many years.

The reason for the first phase is to prevent damage or injury to his 'vampire teeth' and to correct the highly vertical angle on his front teeth as well. At present, they sheer downward, cover his lower teeth, clipping and damaging his lower gums.

We didn't expect to have to go through the mill today, but he got x-rays and molds taken. I'd told him about keeping his foot up with the discomfort of the molds, to distract himself, and boy he had his foot up the second she touched him. Although he did well overall, she had to do the top twice; he had trouble with that one.

The orthodontist was highly complimentary about how clean his teeth are, what a good job J does brushing. If only. My son gets over on that one - an unearned bene, because he is awful about brushing. He has no cavities, so he must have good saliva. That's my story...

Goes to show that a mother's intuition is right; I felt we should start now, just didn't know why. The best thing is that the orthodontist said no extractions! And no jaw expanders! Yeah! 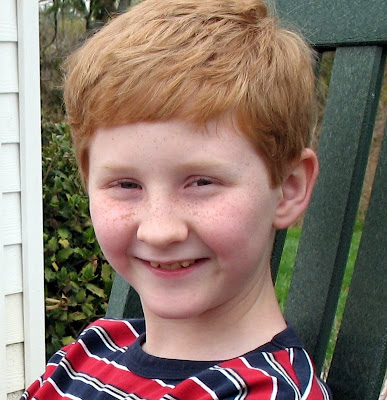 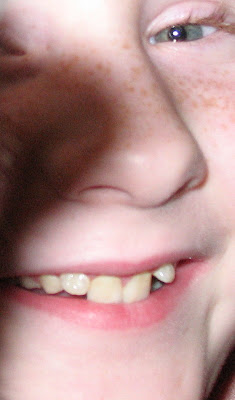 I guess if I had to chose one of the three stages of life I'd have to get braces, it would be right where J is: elementary school. High School has to be brutal and adulthood just means lots of crap from your friends.

Oi. I couldn't imagine having to pay for braces. I hope that little boy who sometimes sleeps in the crazy slide bed doesn't need braces. So far, all I've seen have been a little bit of buck teeth, so maybe I'll get lucky.

My uncle had braces like, last year. I, of course, had to give him shit cuzz we rarely see him and, well, he convinced me that cats barked and dos meowed when I was just bitty. I figured he had it coming. LOL