No scavengering. No show and telling. Well, maybe some telling.

I feel bad I don't have posts in me and I'm sure you're all heartbroken at the lack. bah

Been busy in a good way.

I learned that CDs are picky things to make and you can send them off empty to be juried into a gallery. However, they seem very cooperative, because everything you wanted there looked like it was there. Didn't know stuff didn't stick until you burned it. Windows is so confusing. 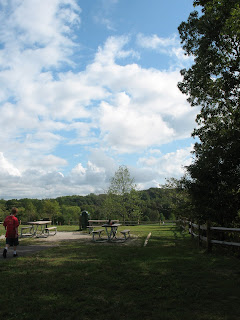 I did a pastel yesterday in my quest to do one each week. I really don't know how all those Painting A Day For A Year people do it; I could even eek out a little blog entry daily for a year, although I did come close.

Like I showed the other day, clouds are fascinating me. I like the clouds between the hurricanes, I guess. Was supposed to volunteer and paint at a festival, but prior to the time I'd had have to leave, it was cloudy and the ground was still wet from the night rains. Of course, it turned out to be a decent day, but I couldn't take the risk, especially with J in tow and a couple hours of driving. So instead, I went to a nearby park and we spent several hours poking around. He brought the laptop and watched movies, which bore such irony for me.

My version of this scene lacks the picnic tables, trash can, fence, kid, computer, and middle tree. Other than that, it looks just.like.this. (You're supposed to be laughing.) I'm working a little more on it before I do a reveal.

On another front, I have had two dates with a lady from India (she's been here 30 years) and will see her next Wednesday, too. She is living here as a companion to her father after her mother died. He wants her here and she's biding time, itching to go back to LA. With neither one of us really wanting a big relationship, it suits. She has two brothers in the area as well. None know of her sexual orientation, but she figures they suspect.

We both appreciate Chinese Astrology. She is absolutely an Earth Dog and I am absolutely a Water Tiger. We're destined to get along beautifully and be best friends. I don't believe in all that astrology crap, but sometimes it's sounds right. She is very quiet, unassuming, and genteel.

She went to art school and took up graphic design. She's been the Director of Art for a couple big name magazines you've definitely heard of. In LA, she was friends with some big names, to include people working with the movies. Friday at lunch, she told me she's going to a premier in NYC in a month. I made a big fuss over it, how much fun and fancy a premier would be, but she said she has a closet full of Indian dresses and they're pretty versatile for stuff like this. She said she'd been to a bunch in LA, but this is special because it's her friend.

She emailed me this evening and asked me to go to the premier with her! She'd just need to get another ticket; the hotel is paid for. Oh my!

She didn't say the date, so I don't know if it's a weekend I'm not parenting. I haven't emailed back yet. I have no money to be lavish or to buy premier-worthy clothes; I'm balking over a few hundred on a workshop in three weeks. She said NYC premiers are less a big deal than LA, but goodness! This film friend has movies I'd actually heard of and seen.

So I must think about it, but I must do so quickly to get a ticket. I need to get over feeling like a bumpkin.

oh Cricket...go and have fun...it sounds like a fantasy!!

and the woman sounds wonderful too.

yes, go!!! You can get something to wear at a thrift store...

You should totally go. It all sounds like so much fun and you definitely deserve to have fun.

It does sound like too much fun to pass up. Hopefully it turns out to be on one of your weekends off...

Ooooh, I'd be all over that opportunity. I love getting dressed up since it's such a rare treat. Having "nothing" to wear is no excuse. Go pick up an inexpensive pencil skirt and then top it with a glitzy top.