Sounds of the creek

My Show N Tell is about my painting from yesterday. 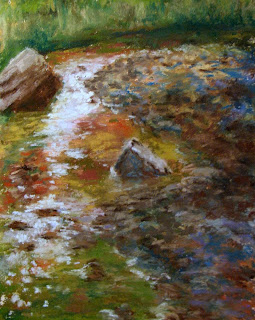 Yesterday was so much fun, we were at the festival from 9:30-4:30. It was my son's initiative, as I was ready to leave at many points because of the heat.

During the morning hours, I painted with the artist group. I forgot about painting with watercolor and how quickly you can crank them out. All the others were watercolorists and all but one had several to share at the end.

I started one and became quite disillusioned with it - I hate doing closed in foliage with no air to breath - so I moved where everybody else was and caught one of the creek.

I really like the geometry of this piece. I think I have a male eye sometimes, using more lines than circles.

A fellow painter, early in the process, remarked how colorful it is. I said I like using color, but I wasn't sure if it was a compliment or not. When I was near finishing, she then remarked how I should frame this one.

Paintings are funny beasts. When you catch them mid-way, you think they're a bit wonky, but then they come into themselves. They go through ugly stages. This one is a little bit larger than 5x7, so it's relatively small; I only worked on it an hour on site.

I did work on this one a bit at home, maybe 30 minutes. I ran out of time on site. I think I'm changing my rule of not touching a painting after I leave the setting. Sometimes it makes good sense.
So Churped the Cricket at 9/14/2008 06:10:00 AM

Wow...you are really talented. That is wonderful!

I so want to learn to paint but my inner perfectionist has so much to say on the matter I am paralysed when I pick up a brush.

You have done a terrific job here. And yes, go ahead and frame it.

Because we were enriching the children's festival, engaging the crowd was part of the gig.

One mom said to her preschooler son, "Look, she's coloring!" I couldn't help to exclaim back, "Coloring?"

I am a prideful art snob. Pastels get a bum rap, often called chalk.

That is beautiful, thank you for sharing.

That is such an amazing painting. I love the rich colors (they are definitely not a bad thing.) Awesome.

That is something I've always wished I could do. You have an amazing talent!

My dad worked in pastels - he pretty much stuck to people. My mother can draw very well also. I am completely hopeless when it comes to art like this, so I am completely in awe of those who can.

I tried to email but it isn't working ( i have a new laptop and no address book anymore from previous).

Have you seen this woman's blog?http://jacquelinegnott.blogspot.com/

I cannot get over her talent.

You did a great job of making the water move in that painting. It truly is amazing.

paintings are funny beasts indeed...nice wording on that

I have gotten pissed at some of my own work midway through and nearly quit them only to find out that the end result turns out great...moral: see things through

That really is nice!!! Color intimidates me...