Probably because I had a false start at the framer's, when the door was still locked and the phone was busy repeatedly, I had a lot of success yesterday.

Initially deciding to investigate other framers in this tiny, scenic town, I got referred to an artist's coop, but the woman manning the shop yesterday did stained glass, so could not help with framing. She referred me to another co-op and I am so glad she did. I found a watercolorist there manning the desk and she specializes in plein air work. She is president of a local artist's society and they go out each month to paint together.

And I learned that the co-op has an opening in October. She called the leader/owner of the co-op and raved about my work. I'm kinda stunned.

With a co-op, the artist must take two days a month to man the desk and try to sell art. They do not take a commission (usually 40% at a regular gallery), but they do charge $120/month. The artist is also required to attend a monthly meeting in which everyone's work is rotated.

To be juried in, it costs $75 and I have to submit pictures of six works completed in the last three years. Because it isn't specific, I guess that doesn't mean that the works have to be available. With me framing three pastels, I want to use them at the place I mentioned yesterday where I'll be an affiliated artist. If I'm rejected by that place, then I'll have them available for the co-op place.

To be juried in the other place (which is primary in my intentions), it's also $75. There is only a monthly fee of $25 for bin space, however they want four pieces for the walls initially, so I'll assume there is some routine wall space deal. When something sells, they take 40%.

I told the watercolorist that $120 a month wouldn't be easy to put out for me (not that I couldn't do it), saying that it would definitely be made up with the sale of a single painting, and I asked how it worked for her. She said she definitely does NOT make it up, that photography has been what's moving lately, and she figures it is equal to selling about three paintings a year. With the contract being for a year, she looks at the broad picture.

So I'd rather be juried into the more prestigious one and pay 40% than pay a big monthly fee, but I am considering the co-op fee just so that I am represented someplace.

I know how my brain and sensibilities work. The second this feels like a business, I will shut down.

One extra perk of meeting this watercolorist: she invited me to paint outside in a rather famous festival next weekend. J is going there on Friday (his birthday) with school and the artist's organization was invited to do plein air demos the next morning. I asked J if he would mind going two days in a row, then emailed the watercolorist that I'd like to participate. (I guess if you live around here, you know where to find me.)

Then I went to the framer and he was open this time. Like the watercolorist, he highly suggested having the stuff matted, as I'd considered doing it with just spacers and frame. Pastels flake and can muss up a mat, but matting gives much better presentation. He said that if I am trying to be juried I need to have mats. Made sense. Cost: $300; he gave me a 25% discount. Be ready next week.

He's very experienced with pastels and I feel confident in his work. I forgot to take pictures with my signature on the pieces, so today (sigh) I'm going back to take some pictures, although I have plenty of shots with no signature. I need to have them signed in my portfolio. I also figure that if I have bin space, I need something to put in it, so I need to have some prints and postcards made and things like that should be signed in the image.

I plan to start with this one: 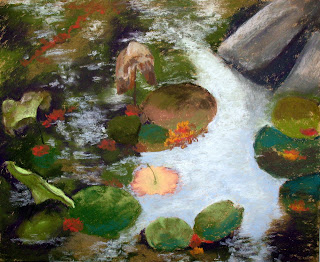 The framer kind of caught his breath and called it pretty (like the guys looking at my painting a few weeks ago), when he didn't really have comments about the other two. Looking at it yesterday, I realized it's even prettier than its picture. I get so accustomed to seeing the digital image instead of the real one. (Maybe enlarging it would help?) But the digital will become a print and a card for some bins.

I might need your help. This all gets so complicated, but I am keeping the energy up. I am surprising myself by having both creative and business energy simultaneously. Much better that last year this time (September 3, to be specific, and I am hyper aware of it, worried it'd happen again) when I got the severe palsy in my legs, just zapping in from out of the blue, which wrecked my confidence completely and limited my social exposure. This year being a do over has taken many forms.
So Churped the Cricket at 9/04/2008 08:17:00 AM

That's so great. I'm glad you're getting it all together on every level. That pastel is amazing. I hope you make tons of money off of your work. It's deserved.

How exciting for you!

Cricket, this is so cool!

go for it....don't let things get in your way, especially yourself