Yesterday was a momentous day, which lapped over into today.

I joke that I paint to a pile. I don't do stuff with my pastels b/c everything has to be professionally framed. So, if I don't have real plans for it, why sign?

Also, I've never been sure what to sign. I'd rather use my maiden name, but people know me by my married. Should I use all three names? Should I abbreviate? These are questions I've had for years.

When I was in college, I signed all those watercolors with the equivalent of Crick. When I was doing watercolors as a new mother, selling probably 75 of them, I signed with all three names.

Yesterday, I went with was was short: my first two initials and my last name.

I want to say that a trend should be carved in stone, but I'm hanging loose about it. If I change it, fine. As it is, it's not that many letters. I kind of feel like I'm rationalizing, because I still really don't know.

So, I was signing pastels and oils, the latter not being quite ripe enough yet for varnish and selling. I took three pastels to a framer recommend to me by my old pastel teacher. Of course, it was closed down. I decided to investigate an additional address I'd seen online, thinking they'd expanded, but they'd actually moved. But they were closed. So I'll go back today for more momentousness.

My push for this is my desire to be an affiliated artist for an arts center locally. I have to supply them four paintings ready for hanging, so that if I am juried in with my 18 other works done in the last two years which they see via CD, then they'll immediately put my stuff up for sale...and take 40% if it does sell.

It's a step in the right direction for me. I've always had the desire, just not the application. Now that this door has opened, I desperately want to be juried in, something I've never tried with a pastel or oil. 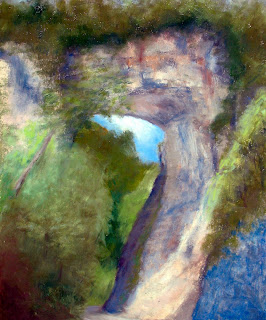 Natural Bridge is 500 million years old. It is actually the end of a two mile tunnel that all fell except for this section. It was eroded out by the very creek that goes by the base of the current formation.

So does this mean that eventually I might have a snowball's chance in hell of actually being able to get one of your beautiful paintings?

Good for you. I love that painting. it's gorgeous.

The painting is very well done. The photo seemed to have come out well, but I will take your word that the live look is much nicer.

Cricket...
I want you to know that I'm still reading you everyday, but I'm not so good about commenting lately....

I read all your camping adventures and everything though...

know that you are always in my thoughts or at least not at all far from them...