7 days on the track, Bandito 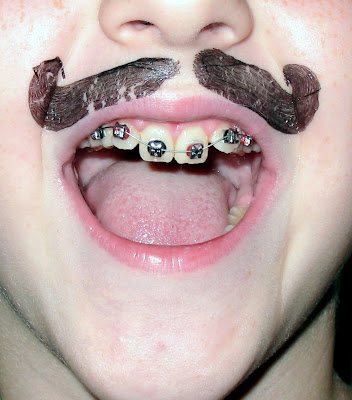 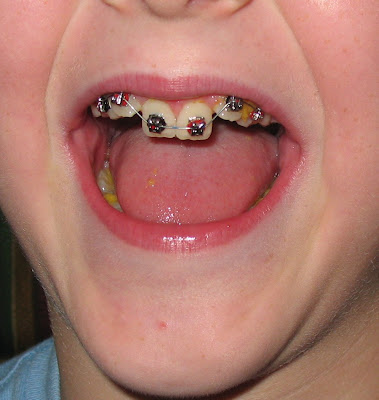 Notice how quickly his second teeth have responded especially. They are lowering and lengthening as his front teeth are raising and shortening. It's easy to tell how much less angular the wire has become as well.

I can't believe how minor his pain has been; he has always had a high threshold. His main discomfort is wearing the head gear with the pressure on his back teeth. He's up to about 9 hours a night, though, way ahead of schedule. Ex instituted a new rule for their house last night: if he's playing xbox, J must wear the contraption.

For some reason, however, since last week J is now hirsute.

Blogger is infuriating me. Posts do not come up after I publish them. To make something appear, I put out a fake, test post to bump it up or something. Then the new post appears and I remove the test post. Tonight, even that didn't work, so I have a limbo post someplace.

Similar happens with comments. It appears as 0 comments on the main page, even if there are a few comments there. Most recently, I responded to Val in the comments, got an email of it so I know it went through, but it doesn't even appear on the comment page.

Is there some reason everything is disappearing? I have become disenchanted with blogging and do not need this frustration to put me over the edge.

Can you preface that "Frito"?
Ar ar!

Bandito covers one while Frito covers the mouth goo in the other. Good call.