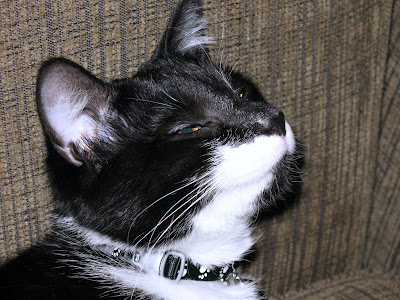 Spenc.er is a couch cat. His previous owner told me as much. Problem is, I am rarely on the couch, me not being the TV sort. Occasionally, I'll sit on the couch and watch TV just so Spenc.er can curl up and get his fix.

Speaking of fix, what I would like to fix are Spenc.er's eating and pooping habits. He eats constantly and it has to go someplace! I buy Nutro hard food, because it is supposed to be consumed less and pooped less, but I don't find that here.

Even though he was supposedly about 18 months old when we got him, he's grown tremendously since he's been here. I think it must be because there are no 120 lb dogs chasing him like there were at his last place. 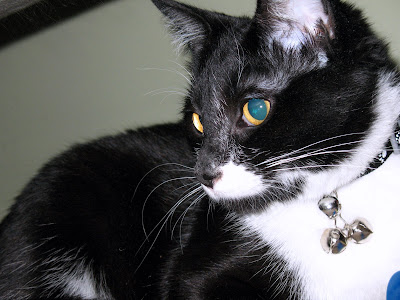 Ahh, back to the poop. He's a digger and spends a lot of time in the litter box. He rips the plastic liner off the sides of the litter box to where he'll do his business on top of the liner instead of in it. When we go out of town, that's all I really need Norma to do - pull the liner back up and she is so gracious for doing just that. I have found some rather expensive liners with elastic that grip the litter pan better, but even they can not stand up to Spenc.er the Digger. 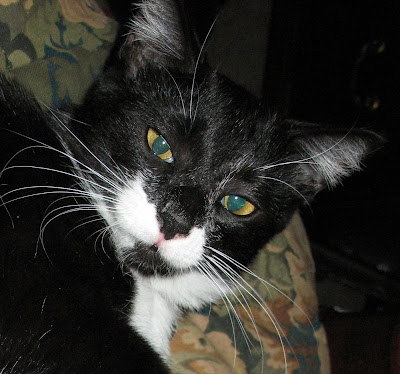 I guess when you get a cat that is rejected by another home, even though she said she was paring down due to too many animals for their HOA, you have to assume there were some problems. As it was, he was a rescue for her, a rescue volunteer.

In his last home, I think he was accustomed to fending for his life with the dogs. There was another cat, but they didn't get along. With the babies and babysitting, it was quite a loud place, chaos. I can see where Spenc.er is aggressive now. He needed somehow to hold his spot. 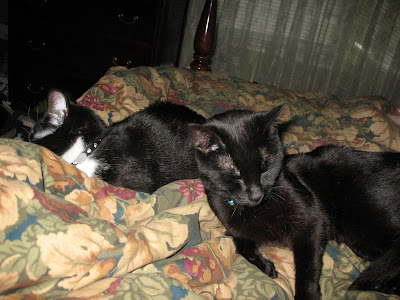 I am not quite sure how many parts it is aggression it is vs. playfulness. When he chases Memph!s, he is usually galloping, as if he's not really serious. Memph!s takes it very serious, though, so that's what gives me my more negative impression. Memph!s, who took a few months to get mad enough, now hisses regularly at Spenc.er. I'm not sure how much a smack down goes on, as much occurs under the bed when Memph seeks refuge, but I don't think Spence really hurts him. Well, except for when Memph always bangs his head as he's trying to hide. 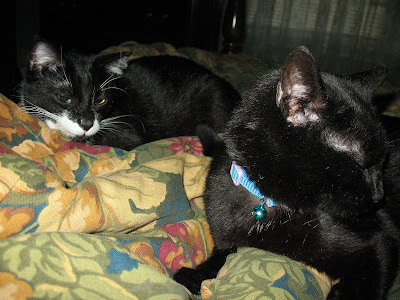 The other thing is that Memphie is a head bangin purrer. He paces when he gets petted and purrs. He bonks his head into things. Many times in affection, Memph has bonked Spence who was watching from the opposite end of the bed. Of course, Spence did not take it well and railed on Memph. Faulty kitty communication. 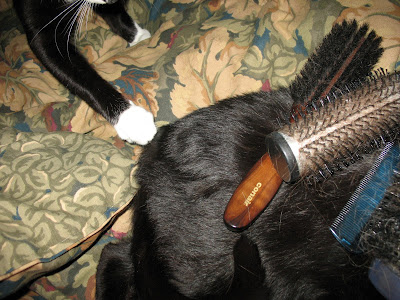 Despite all this, Spence wins my heart. At night, when he settles and stops bugging Memphie, he sleeps right at my feet, to where I don't have anyplace to put my feet. Occasionally, I kick him off by accident, but usually I draw my legs up or I sleep catty wampus across the bed. 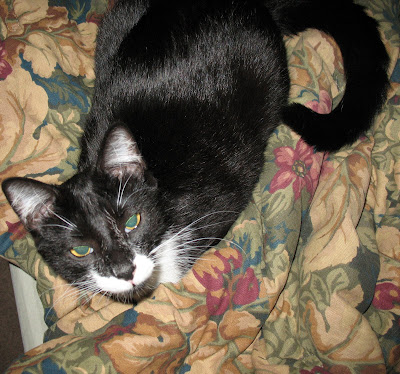 I've woken a few times to his snuggling next to me during the night. Seeings how it is hard to get him out of his corner of the bed, it is surprising. That's one thing he usually seems to do - let Memph have the rest of the bed as his domain.

Sometimes in the office, he'll steal my seat when I get up. He won't move for love or money once he claims it for himself. I'll sit on him and he still finds a way to cling to his territory. 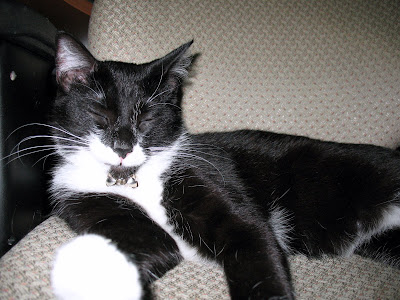 He also likes to lay near my feet when I am in the office chair. This has led to inadvertently kicking, but he doesn't care, just like he doesn't care if we're walking through a tight space where he's laying. We must step over him, he will not move preventatively. I think he hasn't been stepped on enough to know pain.

Like Memph, the world's softest cat who always smells faintly of cinnamon, Spenc.er loves to have his belly rubbed. He hikes up his leg to invite and facilitate. He also likes to have the base of his back/tail rubbed, him curling his expressive tail like a cork screw. 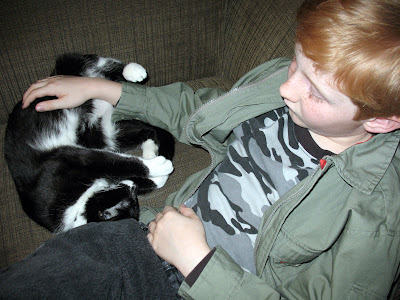 Spencie is a real talker. His last owner called it singing. He's going constantly, always has a greeting. He has one low and sweet coo-coo-coo call for Memph as he circles the bed. Sometimes I think he's trying to lure call Memph out to play. When he's downstairs and I am up, he has the most forlorn, extended call, which I am sure he uses when we're gone. He is a very social cat, always wanting company.

A few weeks ago, I removed the collar from Memph!s so that the bell would be gone. Spenc.er noticed it the first hour, I swear. At least now, Memph!s can track Spenc.er, but Spenc.er has a harder time with Memph!s. Memph!s now has a fighting chance to eat. I do not know how he maintains his weight, as he rarely leaves my bedroom or eats. I also do not know how he holds his bladder and bowels. In all the months we've had him, I've only seen him in the litter box once.

A good habit, Spenc.er loves his scratching post I got off of Freecycle. There are little bits of carpet everywhere. A nail sharpening king, he also loves the horizontal cardboard scratchers. Next to pooping and running around madly, sharpening is his favorite thing.

Okay, he also really likes being by me and often follows me around, chattering away with his tail held high and a crook in the end, as if I am his pair bond, even though J considers him his cat. Spence really is a sweetie, but he would be much better in a one cat household with someone who doesn't use litter box liners.

Some of our SOMC contributions: 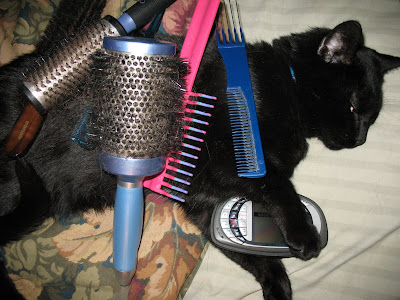 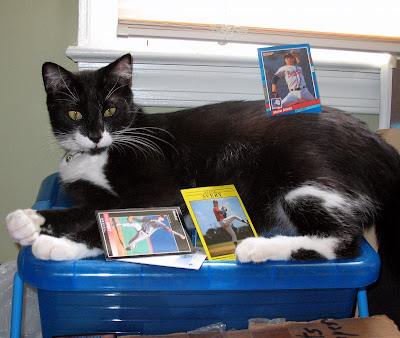 Cricket,
I have had 3 black and white cats and they are the best. so lovable and loyal, with a personality of their own.
Spencer is gorgeous and sounds adorable.

You're exactly right. He has a lot of personality. I've read that about tux cats.

One thing with Spenc.er: I certainly feel loved!

I love this post and will come back later when I have more time to peruse the pictures. What a handsome cat!!!