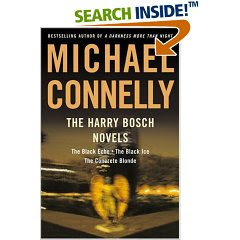 Glad to say I got a good start on Father's Day today. I sent ex 15 books via Ama.zon and their vendors. Several summers ago, I read the Harry Bosch series, which is up to about 13 books. I also read the other smattering of books by Michael Connelly. All are murder mysteries with many layers of life and suspense. I wanted to give ex the set so he could go in order. In a conversation with my father yesterday in which he said he'd like to send ex something, but didn't know what, I laid this out and we're sharing the cost.
I have two of the books to send directly from here, too. Last week when ex's wife was putting together a care package, I sent along about 15 other books and over a dozen DVDs on her shipping dime. Although she probably doesn't know, I do know what trouble he gets into when left to his own devices. When he came home from Korea in 1993, he'd racked up $2000 in gambling debts at the Officer's Club and had taken out a signature loan against his truck. I was less than happy; he didn't tell me until after he'd returned. Keeping him occupied with Harry Bosch will keep all of us happy. Ex is a voracious reader in these circumstances. I want to keep him out of trouble.
So Churped the Cricket at 5/18/2008 04:25:00 PM

You are unbelievably kind & generous (myself; I'd probably leave MY ex-S.O.B. to flounder, tho' it WOULD raise my opinion of him somewhat if he were man enough to serve his country...)!

What a nice thing to do for an EX. Hopefully there is a bit of appreciation for the gift.