It is the next day (Sunday, retro post) and I am still paying this evening. It's not as bad as one would expect, considering I drank a whole quart or liter or whatever it was. [Edit: okay, I learned it was a fifth.] I rarely drink liquor. I had never had more than one or two Captain Morgans in an evening previously. I had never taken liquor as my BYOB to a party. I also had never before sat at a kitchen bar with my liquor bottle right under my nose, entirely too close. I know better than to do these things again.

However, the party was excellent. The host was the birthday girl. People flew in and many locals came, too.


The weekend was also excellent, exceeding expectations even. I felt very comfortable quickly and she did, too. We really get each other and can make each other laugh. I spent from Friday morning to Sunday evening with her and didn't really get sick of her. Pretty good for this introvert.


I think lesbian sex would take some getting used to, but that's not to say I wouldn't do it again. I don't think I could be on a strict diet of it. Basically, I like dick too much. And I kept flashing to an image of doing a gynecological exam. I know, not romantic. I guess I'm saying that I don't exactly understand what all the fuss is about, but I'm willing to keep investigating. For the sake of the team, of course. 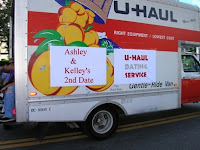 As for us, she would probably have us be an us, but I told her not to drive up to my house in a U-Haul. I am a butterfly and do not want to be caught or caged. Not only do I not want a relationship, I really do not want a long distance relationship. Or one with U-Haul potential.

My therapist last week asked what my goal was for the weekend besides a new sexual OPPORTUNITY. I told her that wasn't even a top priority. My main goal was to show her a good time and see the sights custom picked for her viewing pleasure. In that, I was highly successful. We saw lots of landmarks and she was so incredibly appreciative. It was wonderful making her feel special. She's her family's caretaker, deserving of some TLC herself.

Well, I see I missed something, but I am so unconstant that I often do miss things. Sorry. Sounds ok to me. At some point I have considered, if not committed, all the taboo acts of pleasure. If it' not an act of Callous Disregard, what's the harm?

HA! I have had the Capt kick my ass many, many a time. I'm just glad that while he's kicking my ass, he doesn't make me want to do the same, which I can't say for my arch nemesis, Tequlia. o_O

Ya know, if you decide that you do like the girl on girl action, there are a wide variety of fake dicks out there. Some even claim to feel like the real thing! :-P

All humor aside, I'm glad to hear that you had a good time. And, while you may not be looking to become an "us", hopefully the two of you will gain a wonderful friendship out of everything.

Sounds like an interesting weekend with the Cap'n and lesbian sex. Fun is fun, enjoy stuff when and while you can. Glad you had a good time.

Ron, yeah, it was a new development over the last few weeks.

Brite, you are right about the tequila. Now, I can drink Margaritas just fine, but shots make me violent. Happened twice, never again.

E-e, thanks. You are so damned supportive ... for a guy. heh

good for you. I'm just not attracted to women sexually, although after dating enough dicks, it starts to look better and better. It will be interesting to see where it goes.

I just figure that everybody should do what makes them happy. Lord knows I do, so why can't everybody else.

Besides, I have nothing bad to say on the subject of lesbianism or bisexual tendencies. Two of my exes were bi and quite frankly I thought it was cool as hell.

Glad to hear you had a good weekend... [ya know, I myself was joking about switching teams a few short wks ago?!?]