When we were at the gift shop of some caverns a few weeks ago, J wanted to take on a science project.

This was our result after about a week. The larger rock stuck out of the solution a bit and the crystals proliferated after the water level fell from evaporation. It was strange that so much grew out of where there was so solution. Magic, I swear. 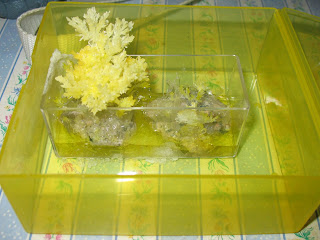 We let them grow undisturbed in the bathroom cabinet. I am just now realizing this space has gone unused!

Meanwhile, the water finally fell low enough for the smaller rock to grow; we turned the plastic box around for better viewing. It didn't do quite as well as the first rock, which filled in considerably, but I am surprised how well the smaller one did considering the time lapsed. Yesterday was after almost three weeks. 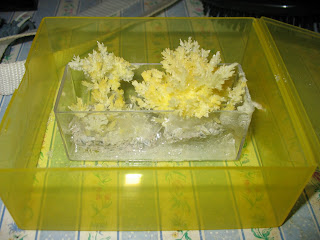 You can start to make your own working "Land of the Lost" matrix table. Sorry if you have no idea what one is!

Purdy. But yeah, what DO you do with it? I have no idea.

It looks cool. Sometimes it's all about the process and not the end result which may or may not have a purpose.

My son's as bad as me about keeping stuff. I lack the fortitude to throw it away and he gets too attached. Bad dynamic there.

dmarks, I haven't a clue! heh

I remember those kits...it was fun for a little while, then my ADD kicked in and I was bored once again.