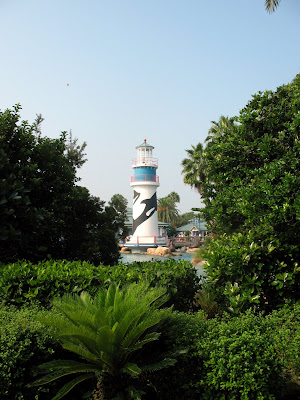 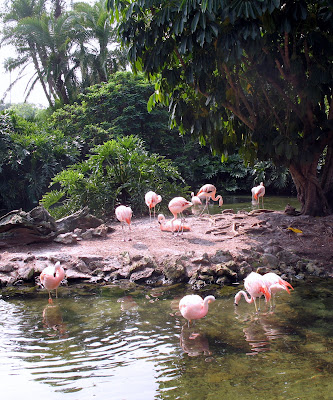 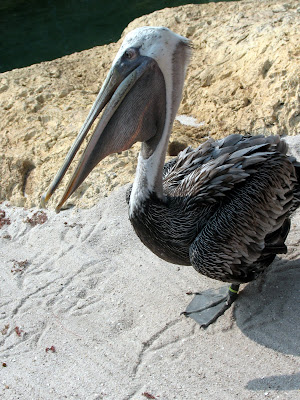 One of Three Pelicans, so funny to watch. Love the pattern in the sand. 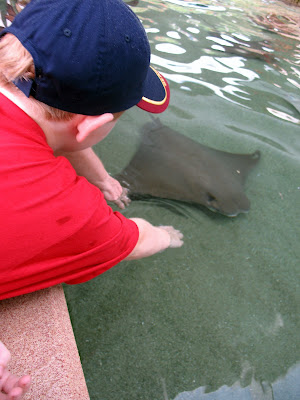 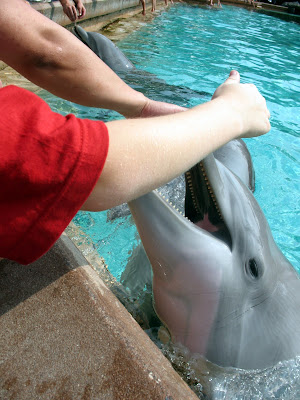 Second Animals Touched: Dolphin
I've always wanted to do an dolphin encounter and this was close to it. 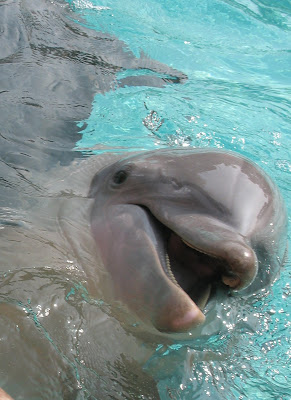 Such a happy face. They're easiest to touch if feeding. Some will talk to you as you feed. Later we fed the sea lions and the next day we fed the sting rays. (So much better than the petting zoo fare of a hand full of corn and some mammal slobber.) 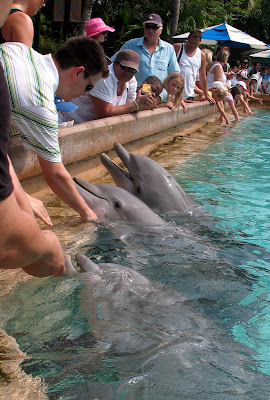 Lined up for petting.

Later: Dolphin under the water and performing above, petting a penguin and a Clydesdale (touching animals three and four), sea lions, manatee, whales, and more.

I only took my camera in the first day and, while I don't regret the bulk, I wish we had pictures of petting the exotic birds (fifth animals touched) and seeing the Polynesian dinner performance.
So Churped the Cricket at 8/14/2007 08:55:00 AM

As much as my son likes looking at these kinds of things, touching them is something else. He gets wily when I'm holding a chick, duckling or a toad. Maybe it's an age thing but you would think I 5 year old would love touching any of these things...

What does one feed a sting ray?

When we fed them at Grand Cayman, we had white chunks of fish. You hold them flat and their mouth, which looks like a space ship entry on the bottom, hovers over to suck it up.

The sting rays at Sea World had more like mouths and they'd eat the fish from the front. The food provided for a mere $1 each looked like 4" long sardines. J dropped his a few times and they vacuumed them off the bottom.

Sting rays and dolphin feel almost the same. I wanted to much to touch a dolphin tail and even held one by it - the guy kinds turned around and smiled a me. Of course the dolphin is firmer, but the texture is the same.

Duh, the fish pictured with my mother is what we fed all the animals.

I love your pictures!