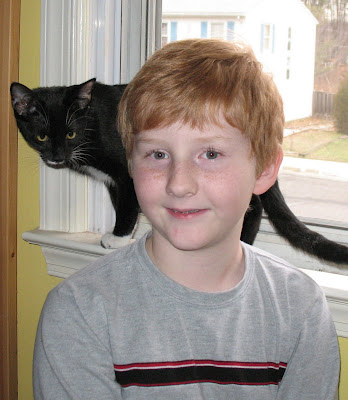 We went to a rescued cat fair yesterday and got us a baby. He's only five months old; we'd anticipated going older, but I think he fit our needs the best.

His name is Hamil.ton, but when they called the foster mom for me so we could talk, she said he answers to Beaur.egard. Kinda funny that. So Beau.regard it is. I could tell she was having a hard time letting him go. He's quite full of personality and I think he will stand up to Spen.cer very well, plus sleep with J.

As an aside, I learned the way to change an animal's name is to call them both names for a while, as in Beaure.gard becomes ZippyBeaureg.ard who becomes just Zippy.

At the fair, they called the mom again to inquire about his food, so I could buy some and transition him. A little while later, she called back and said she'd be happy to take him back if I needed to return him.

I feel like I cut out part of her heart, but I really think he'll do well here, as long as he and Spencie butt heads less than they play. I am learning that tux cats are natural born check-er-out-ers, busy, nosy, curious. I think there's plenty of space for both of them. And lots of junk to poke through. 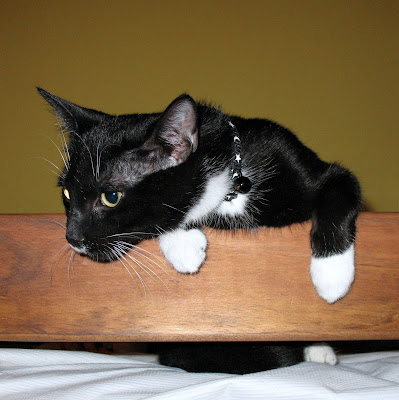 We're easing Beaureg.ard in slowly; he's going to hang in J's room a few days. Spencie has shown great interest, hovering around the door. At the beginning, Memphie sniffed the carrier and took off when the baby hissed. Typical. Since then, Memph has forgotten and is his regular self, coming out of hiding for his doses of loving.

One of the rescue ladies says she's seen it before like the situation at our house when one needs a playmate and one feels bullied; the new one becomes a playmate and they forget about the old cat. That has been my goal. Glad I came up with what is deemed the proper solution.

What I didn't expect was to have three black cats out of the deal, but personality is more important than color. He's been pretty entertaining already. He likes J's bunk bed and easily jaunts up the ladder to the top, which he has claimed for himself, then uses the ladder to get back down again, too. 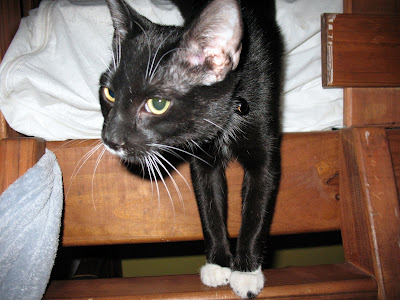 He loves to drape his paws over the rail and watch the world go by. He's already on to the flash, so pictures were hard to get.

He has his food/water/litter in there and we'll give it several days like this, if I can keep J patient. He wants to let Beau out today.

Spencie is captivated by the closed door and hearing J talk to the kitten, plus the kitten's belled collar. He's tried to get in there a few times, but the baby hisses. Once or twice, Spence hissed, too, and that is new for him. Although it's early in the process, I think we got a kitten that will warm to our rhythms quickly and I think Spencie is curious enough to make him a playmate.

Later today, we'll give all three cats yummy Fancy Feast wet food treats on either side of J's bedroom door. My cats haven't gotten Fancy Feast in a while, but I think they'll tolerate each other enough to get the treat. The philosophy behind this is, "Hey, yumyumyum, this treat is great. And there's a cat on the other side of the door, but this is great anyway. The world is still good, even with that other cat in it."

After that, we'll put Spencie in J's room and let the baby out. Instead of letting him roam the whole house, though, we'll do my room with Memphie in it. I need to think it through.

I figure with all the work that went into choosing a cat, I should introduce them by the book. Right now, he's safe and secure in J's room. Kinda hard to break that innocence just yet. 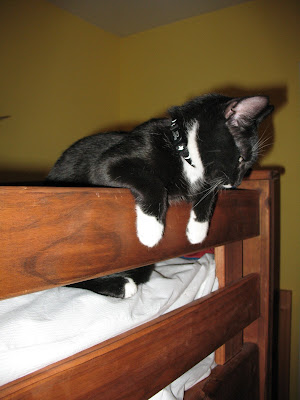 I have had 2 tuxedo cats, still have one his name is Odie and the most loyal cat ever. Follows me everywhere and wants to be held.
Your new cat is a beauty!
I hope it all works out.

Congrats on your new family member. Z passed his sore throat considerately on to me (we've both been fighting the sinus crud) so I am fiddling w/his [Xmas gift from grandma] laptop so I don't even have to exert the effort to climb the stairs...

If I can find the energy later, I need to post photos of MY kitties! not to mention updated photos of the colt...(Maybe w/my upgraded Xmas computer it will be easier?)

That is a very sweet picture of J. You can tell he's thrilled to have a new friend. Fingers crossed for less hissing and more playing, soon.

Cricket,
He is so adorable!! Made me smile and feel warm and fuzzy while I worry about my old kitty who had to be brought to emergency today. (hubby took care of that since I'm 3,000 miles away)

She's hanging in there for now...so I'll just come here and look at cute pictures instead of worrying about her.

I want a little kitty again sometime too. I think going young is a good thing. The bonding is so special with the younger kitties.

AW! He's absolutely precious! And he's HUGE compared to my two babies. Granted, he's a month or so older, but still.

I hope he fits in well with the other kitties!

I have a soft spot in my otherwise crabby heart for tuxedo cats. They're darling. And really hard to adopt (as an foster home) as people tend to get all superstitious about it. Weird, right?

Congratulations on your new addition!

How totally cute! Congrats on the new cat! I love that last shot of him on the top bunk.

I don't think I could ever be a foster "parent" for a pet like that, I'd get so attached and it would break my heart when I would have to give them away.

I gasped when I saw him.

I love Itty, but I miss Boots.