Whispered to Memph all week, "I'm getting you a girlfriend." 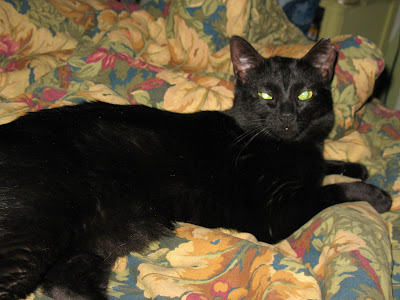 I picked up Syl.vie after lunch. Boy, she has spirit. She would not get in the carrier and it wasn't the best start for us. When we got home, I kept her in my room for several hours with Memph and they got along brilliantly. She laid down on the bed so their hindquarters would touch and tails mingle. I'm surprised she's a little bigger than Memph, although his big ol' head wins that contest. 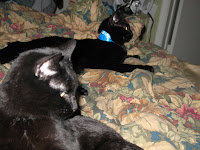 They were sweet together, until J got home and Spence sneaked in. I'd let him and Be.au sniff the carrier when I was bringing it home and nobody was unhappy, but Spence was very unhappy face to face, even though he was pretty much fine when I'd brought Be.au home - things are easier with a naive, happy-go-lucky kitten. Spence wound up cornering her and they had spats. She was so upset that even Memph and Be.au made her mad by evening time.

For sleeping arrangements, I had Spence with me and he was happy having me to himself. The other three slept downstairs in different places. That was tough for Memph, as he is my bedroom cat. I don't remember him sleeping outside my room since his first night here.

Right now, I have Be.au and Spence in my room and they are dissatisfied. I trust Memph and Syl.vie together downstairs.

Syl.vie is equally as quick to purr as to bite/scratch. She is very loving, but I have to watch her tolerance level very closely. I reprimand her after an incident, then praise her strongly. If anyone has ideas about this, I'd appreciate it. Funny, the lady who did a follow up call after we got Be.au was talking about cats biting and it being because they were played too roughly (think claw hand over the head) as kittens. I hope I can break her of it and that it is being exacerbated by the change.

Syl.vie loves J and rubs all over him. He's fascinated by her half devoured ear and asks her how it happened. All I can say is that I hope it wasn't human-induced. 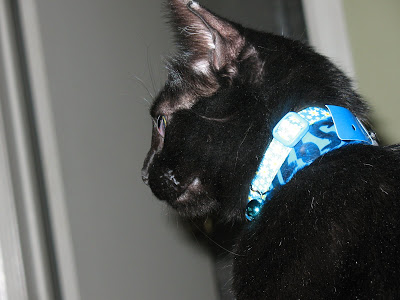 Notice how huge her eyes are, like saucers. On every other cat I've seen, the eye closes into a slit and you can't see the eyeball. With her, you can still see the bulge of her eyeball, almost like it's human. (She's on to the camera quick, so it was tough photographing her eyes open.) She also has a delicate, squeeking meow that is lovely to the ears.

I'm sure this mess all will pass. This transition happened way too quickly and we're suffering for it, but I think we'll recover soon enough.
So Churped the Cricket at 1/30/2008 09:31:00 AM

the mess will indeed pass. I've dealt with much rougher integrations of cats....like I thought one was going to kill the other, literally, and in the end it worked out fine.

As far as reprimanding her....I suppose you should check in with Val. I've never found that reprimanding that kind of behavior works for cats. What I've found, and maybe I'm pussy whipped (ha ha!!) is that you learn how to avoid doing the stuff that annoys or triggers the cat!!

I'd like to know if there is a way to discipline a cat. It has always seemed to me that they do what they do---but then again there are trained cats in circuses.

Your cats will have to do the pecking order themselves. Who is queen or king (most assertive) and then down the line.
Once that is established and everyone knows their place, the cats should calm down.
Hope you have some peace and calm soon!

Yeah, give 'em a little time...
If they have the space to spread out (separate feeding stations/litterboxes?), they will work out their little social strata.
The only "discipline" that *MIGHT* work -- if caught in the act! -- is a water pistol w/a squirt of lemon juice...

YAY! I'm not sure about what advice to give, but YAY NEW KITTY!!! My girls have pretty much decided to give me the evil eye when I bring home a new one and ignore me for a day. They hiss at each other for maybe a week and then they're kosher.

Mydna has saucer eyes, too. Greg was just commenting on that actually.

Since we fostered many different cats (while owning 3 of our own), and we lost a room to isolate the new ones, we learned that after about a week, the turf wars are done and aside from normal skirmishes, they would get along well enough.

Congrats on your new beauty. She looks like a keeper!

Looks like a nice fit...hope cat and mom have many good years together.