and preparing for next time...

Showers here are $.50. Not bad. I only took one shower, but deservedly could have taken more. I figure that floating in the river washes away more than grime. It washed away worries and made me glad to be alive. Can't buy that for 50 cents.

It was hard to leave and I could not wait prepare to come back.

The campground has tubes for rental - only $10 for four hours. For an extra $2/tip/gas fee, they'll take you a mile up the river and put you in. It takes about three hours to float back down to the campground, depending.

When I take J next week, I figure we'll float down one day on their tubes, then rent a canoe one day and perhaps a kayak another day.

Because I don't figure they'll tote you up and drop you off unless you use their tubes, I'll play by their reasonably-priced rules, although I will be checking for sure. However, from the beach area near the sunset pictures, passing by my campsite, to an inlet below me, many tubers float by and then walk their floats back to the starting point over and over.

Upstream beach, where the water gets maybe 3' deep: 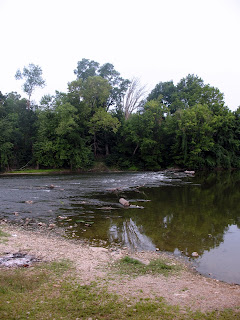 It goes by an area near the banks I understand is closer to 4' deep, but most is 2-3' deep. One area near my campsite has a high island only about 6" deep and I saw a couple canoes stranded there.

And downstream, a spot I have saved to paint. It points east, so would be best in the morning. Floating to this point is probably 600 yards or more. 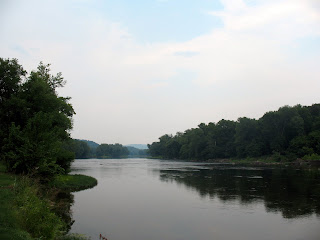 So cute, the teenager camped next to me would float by with her Pomeranian, a tough little dog who belied her frou frou exterior and actually fetched baseballs from the water.

Wish I'd gotten more pictures of the tubing. And a video of the tubers going by.

There were many large groups camping together, some of which go every weekend. One group of young adults probably 25 strong had it down pat. They'd load up uptimillion floats on their vehicle, maxing out bunji cords, then drive upstream to the drop off point. With so many people and cars, the logistics were easy for them. In fact, floating was made quite simple with the likes of this Coleman Party Island, which holds 8 and has a weight limit of 2000 pounds!

Imagine seeing that baby coming down the river. Huck Finn ain't got nuthin on them.

Okay, I covet it, except I do not have the means to fill it to capacity. Wanna come visit?

And I covet an inflatable kayak.

and a girly pool lounger for me...

I figure I can loop a cord through the foot thing and make an anchor. That way I can do the couch potato version of rafting and never have to haul the thing back up stream!

So you'll have to wait until after Labor Day for my next mountain installment, unless I get nostalgic between now and then. Oh, I have to tell you about my Watamaulen.

That floating sounds dreamy......I wish we'd had some kind of summer up here but, alas, all we had was rain. So there was no real reason to go out and float somewhere, it was never warm enough.

Lala,
It was so pleasant.

During the day, it got up to 81, maybe 85 max. At night, it got down to 51, so it felt very cold. The first night must not have gotten that cold, or else the sleeping pill worked that well, but the second night had me pulling out the Emergency Blanket before dawn. It's sort of a tarp with a shiny side for rescue. The third night, I went ahead and used it all night, waking up with a wet sleeping bag and a lot of condensation.

I am buying so many camping gadgets.

Looks so fun, Cricket! I wish I could go!