I should not be home typing this. It is not a happy Mel's Show N Tell today. Just let me vent. 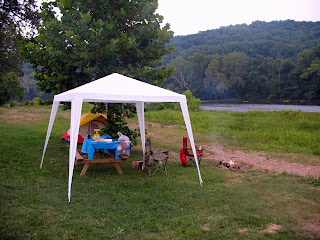 There was a little red and yellow tent. It was used by a mother and her son several times each year for seven summers. It didn't cost a lot, but it was well loved. This mother was quite proud that she was the one her son associated with camping, not her Eagle Scout ex-husband!

I believe we must say good-bye to our little tent.

As I mentioned, during the rain storm our white canopy collapsed, tearing in two places. Everything under it was wet, but I put some of it in the car anyway. I left the rest propped under the half that was still standing.

The campground doesn't have anyone manning the gate or opening the store on off days, so there was nobody I could tell that we were possibly leaving for a day or two. I had, however, told the store manager a few days before that, if the rain came, we would be out of there and would return. Apparently, she didn't remember this.

The campground staff was quite alarmed that our site was disheveled (they called it wind blown) and that we were gone. Actually, it wasn't disheveled. Everything was as neat as possible and doing fine in the rain, despite the canopy being torn. That was a detail that evaded them.

Thinking they were being polite, the lady who mans the gate took all of our sopping wet gear from the table, the tarps, the torn canopy, the canopy poles, etc and put them in our tent. She then took out the tent's poles. They stuck it all in the back of a truck, air mattress still inflated, and put it on the lawn near the store. She overlaid the rain fly and the tarp on the essentially flat, wet mess to make sure to seal in all the moisture as best as possible. Forgive my sarcasm about people who should really understand tents and gear better than that.

She thought she was doing us a favor, because she doesn't like the Latinos and said they'd steal everything. I was absolutely prepared for it all to be stolen and had gone there mentally already. I was not prepared for it to be a reeking, mildewing pile of crap created by the "professionals."

They seemed appalled that I had angry actions, although I seriously kept it in check. When I complained of the smell of mildew of my hands and of having severe asthma that could not tolerate the tent, the owner, who was very surprised that we were leaving and he was losing a customer (although I'd already paid for nights we were gone and the night I thought we'd be staying - I didn't even ask for a refund) kindly said that I could go to the bathroom and use the soap to wash my hands. I replied with some level of disgust that I could not wash my whole tent that way. I was kinda surprised at his lack of insight there. I told him that I had the option to drive someplace and invest another $100 into a new tent, but that was not a possibility for me. Looking back, I forgot they sell tents in their store; he could have offered me one at a seriously reduced price to make up for them ruining my gear.

So now the tent is up in the backyard, hopefully airing out. I am afraid that any cleaning measures would remove the waterproofing, something I couldn't complain about previously with this tent. It had a little leak in one corner, but the mattress and sleeping bags were dry when we left about 6 hours into the rain storm, that is, until the rest of our campsite was piled inside of it.

Before I realized the stench of the tent, I'd gone in to scope us a new lot in the campground and had put out a few things to reserve our site. When I returned to the tent and J, who'd been assigned the task of clearing out the tent while I was gone, he was sobbing, saying he didn't want to stay. I understood. It's bad enough setting up a campsite, particularly when you thought you were returning to a campsite that just needed a canopy removed, but to have to remove all the wet stuff, pack up all the gear into the car, and start all over again at another site, it was too much for him. When I then smelled the mildew, it was too much for me.

What makes me angry is that this was our Labor Day weekend and I'd planned it for a few weeks, choosing this over other options.

We made the best of it coming home, stopping off at a park and getting an historic house tour. We drove through some vineyards, because I am determined to scope out the best vineyard vistas for a painting. Finally, we stopped for dinner at 5:15 at a place that had karaoke starting at 6p. It took 2.5 hours, but I finally sang Dwight Yoakam's Guitars and Cadillacs, mostly because every song before then had been Country; I luckily wound up choosing a crowd favorite, which helped, as I am perhaps the worst singer in the world. It was a lot of fun and my frustration took a hike, until I got home and had to unpack a heap of mildew.

Any suggestions on cleaning a taffeta tent? After just two days stewing, it doesn't have mildew stains. I'm thinking my tent might make it after all...with some elbow grease which was not in my cards for this weekend. Blah.
So Churped the Cricket at 8/31/2008 12:01:00 AM

OMG what a fiasco. So sorry it ended up that way, but sounds like the mighty white tent might be okay after all? Dinner and singing sounded great and glad that the night ended with some fun.

Oh no...I would use a mixture of 25% bleach and 75% water. While you may need to rewaterproof it, that can be done.

Oh, no! I am so sorry your camping trip was ruined, that just sucks. Plain and simple. And those campsite people should have done something, anything, to make it up to you. Geesh.

I woulda been so pissed, I can't believe they did that. Any "thinking" person would never have stuffed it all in there like that. People just don't think.

I don't think bleach would be a good option - but the mildew does need to be killed. You could set it up and keep spraying it with a mix of water and vinegar. The vinegar is not as strong as bleach, but will still kill mildew without bleaching and weakening the fabric. Waterproofing spray is available should you need that later.

Sorry it was not the experience you were hoping for. :0(

Good luck with the tent.

I hate stupid people. She did a great job of not only ruining your tent, but your future camping experienes. :(

Gee, sounds like you had even MORE fun than I did! [post forthcoming]
Can you wash the tent in a commercial machine, add 10% bleach?
It will have to be rewaterproofed but that's doable...