After I'd seen a bunny, two pheasants, and a multitude of deer, I saw five bears. All were in the Skyline Drive portion. There are warning signs about bears all over the park, but I'd considered seeing one a long shot.

The first was a bear much like Yogi: munching to oblivion. This fellow had an audience, as he was quite easy to spot hovering almost over the road. He had climbed to the top of a large apple tree for his own personal buffet. About two dozen people stood nearby or sat in their cars. I was one of the latter, me not interested in a run in with a bear. However, this guy was perfectly content to be eating with an audience. 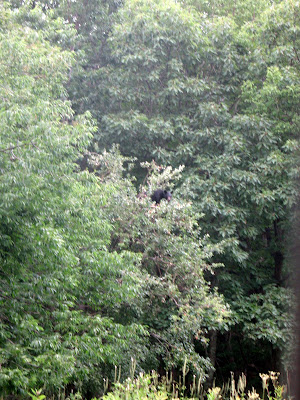 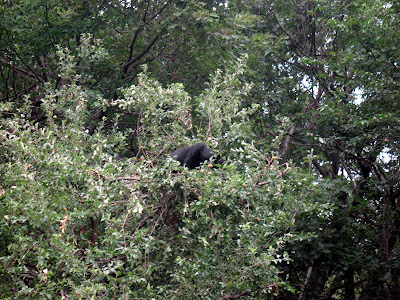 This video of the bear shows him, but not that well. You can hear him chewing, though.


A hand full of miles to the north, I saw this bear near the side of the road as well. She was casual like the first, which was especially surprising considering her twin cubs at just over the gully in the woods. One of them was quite laid back and the other threatened to climb a tree twice. One picture is of the mom, the next of the cubs, and the third of the mom and a cub. 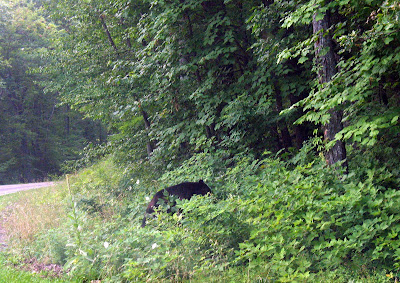 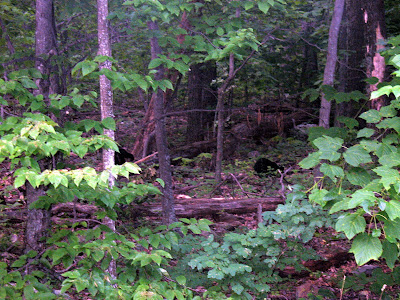 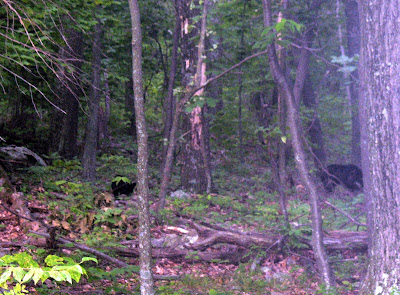 The fifth bear I saw was the only one skiddish on the day. I saw him on the side of the road, much like the mom, but he darted away.

really cool Cricket...
I'm moving about a mile from the Blue Ridge Parkway next Thursday!

And, oh, I loved all your updates!

Bears, what bears, i don't see no stinkin' bears! Well, not very much, anyway. I guess there was 17 deer hidden in those shots as well? Nice foliage, though!

Ron, I'm due a belated birthday present from you. Wanna send me a better fricking camera?? ha

no...just click on the pictures...the bears are very clear when you enlarge them!!

oh, but yeah, you might still want to give her a better camera!

Not likely. Im still trying to save up for a pair of eyes like I had when I was young (before I spilled milk and honey into them). Only thing I can give the Churp is an occasional Texas howl! (Well, I could give her rabies, but she probably wouldn't take it!)

Gianna,
Thanks, on both accounts!

Oh, and I'm quite jealous of your move!

You really saw a lot of interesting creatures on the trip...what no feeding the bears like the deer?