Driving along the Parkway

Forgive the choppiness of this post. I want to get it out before I leave again.

This is the north end of the Blue Ridge Parkway from Waynesboro to Roanoke. The speed limit is 45mph. At Peaks of Otter (Otter being a creek running a long distance along the parkway) is where I fed the deer.

Skyline Drive is above the north end of the Blue Ridge Parkway and in the Shenandoah National Park. Costs $15 to drive it and has a speed limit of only 35mph. It's where I saw all the bears.

This was my first painting, down toward the Roanoke end. The Alleghany Mountains are in the distance. 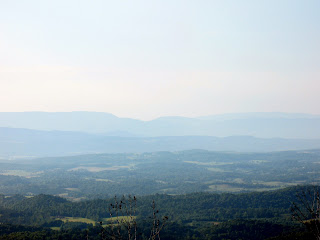 This is the James River; east of here is where my French Huguenot ancestors landed in 1699. 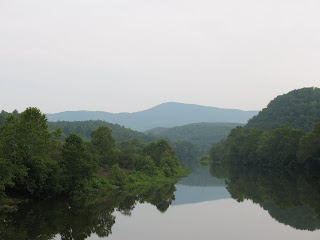 Another view from the Parkway west. 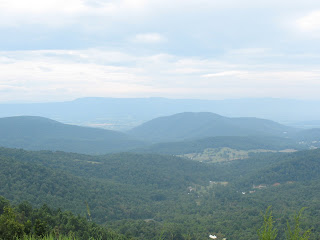 I loved seeing the blue haze in the distance and the deep green humps in the foreground. I could see it again and again, however, they all tend to look alike. And when one is searching for something that stands out for painting, nothing stands out.

I got frustrated. At one point, after camping out at Peaks of Otter, I drove over two hours that morning just searching for something to paint. I embarrassed myself.

Finally, I pulled over at a wide place in the road, not a real pull off, and found a composition that suited me. I haven't taken pictures yet, so I'll show the paintings later, but this one I showed to my therapist, because they're all still safe and sticky in the back of my car. It is in the teal family and I offered it to her because it'd match her new office. She was thrilled and I'm glad to have one less painting to store, although I'll keep hers a while longer to varnish when it dries.

The day before, down by Roanoke, I took one of the first pull offs. It faced west over the Great Valley, toward the Alleghany Mountains. It was funny being on one ridge and painting the other. I painted one I liked here and one I didn't like.

The last painting I did on the second day was also after hours of driving by hazy blue vista after hazy blue vista. I wanted a meadow. I wanted to paint some golden yellow, then I saw Big Meadow on the map and crossed my fingers that it actually was a big meadow. Yuppers! 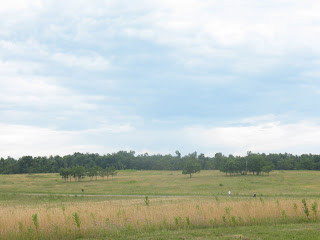