I had so much fun this long weekend, I do not know where to begin!

Before taking J to camp, we went camping and whitewater rafting. Because he's 10, he's too young for the Lower New River, which is several hours of Class III-IV rapids. They call the trip we took, the Upper New River, a paddling trip, but it was still loads of fun and we consider it prep for when he can do the Lower in two years.

The section of river we were on has a number of Class I and II rapids, baby stuff. It also has two Class III rapids toward the end. There were also some long stretches of just paddling in the center section. It totaled 6 miles. J paddled all of it, except for a short, flat, boring time he rode the main boat driven by the guide.

Our group was small, J and I, plus a grandmother, grandfather, and their 8yo granddaughter. And two guides.

The following shows the lead tour guide and the grandmother, who'd swapped in the boat as J went back off it into his duckie, the inflatable kayak, an extra balanced on the back of this boat. Classic picture. The big boat carried our lunch and other gear. Without the oar set up, it's the same boat that is used on the Lower New with 8 people. 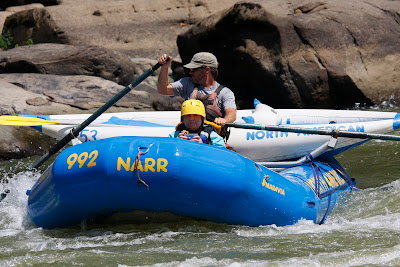 Ahead of time, I had debated whether to ride in the raft or get a duckie for two, like a blue one pictured below. Our other guide suggested we try out two single duckies instead and it worked very well.

J rode out rapids like a pro and was the only one to make it through both Class IIIs without spilling out. I was not so lucky, as I t-boned the grandfather and granddaughter after he'd hit a rock and got spun perpendicular. This is at Surprise Rapids, the one where the expensive camera guy is located and he caught the whole event just for you, well, after I paid $60.

J, acting the pro, with one guide on the left and the granddaughter on the right. 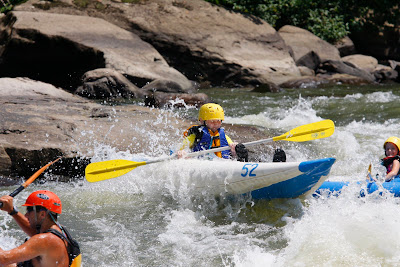 The granddaughter and grandfather were opposite the flow by now. They were in danger of tipping, because they were being pushed from the side by the water. 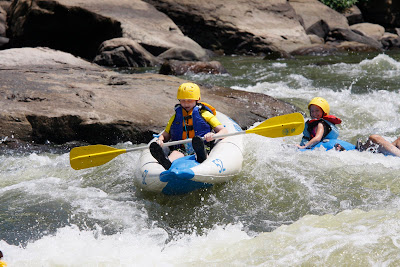 The last of our group, here I arrive on the scene. Note, even though it's only Class III, I am very high and the grandfather is very low. 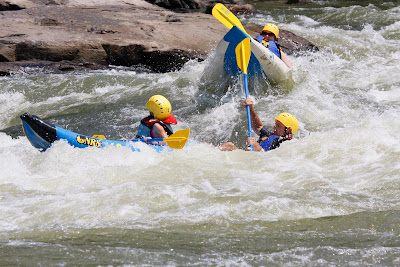 Now I descend on the scene. Notice the grandfather's paddle aimed my way. 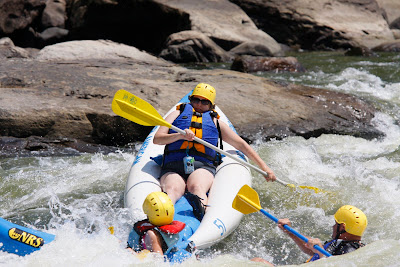 I've ridden the rise and all I can see is the granddaughter's paddle aimed at me now. I thought I was going to die via paddle impalement. Click to enlarge and you'll see I am smiling. Daft. 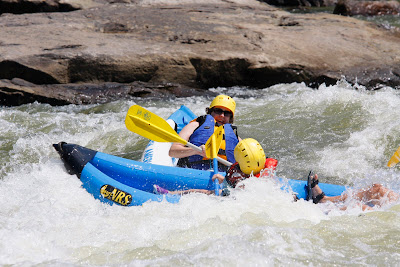 It's at this point that we all go under. I came up under my white boat, then found myself under the blue. I waited for it to pass, then realized it was going over me the long way. My lungs exploded, I inhaled churning water, and I thought I was going to die for the second time in a very short while.

Before you know it, it's all over. I was very tired and shaky, but hung in there for the next Class III, one for which I took the wrong route: I could not swing left and hang right where they'd said, so I wound up going down the middle for the second half.

Again, I was afraid I was gonna die.

But I still want to go back and tempt fate again. I think thinking you're gonna die must be addictive.

the photos are great...very action filled. I can live vicariously through those pics, for I will never raft. (I fear water)