Chronicle of a Beloved Cat: Our Sad!e 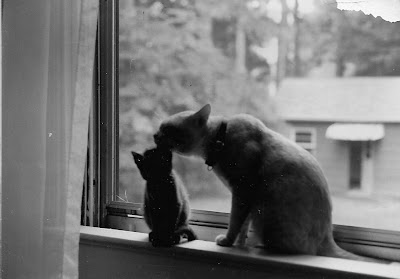 With Jell0 in the kitchen window, 1988. He doted on her. She tried to nurse from him. 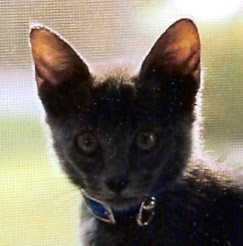 With kitten ears only a mother could love, Sad!e in the kitchen window, basking in the sun on her skinny bones as she did her whole life. 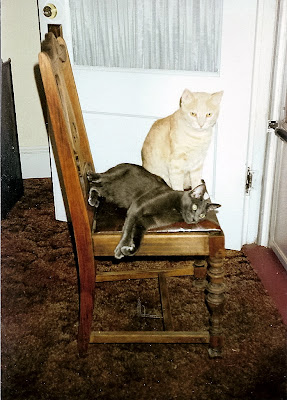 In the house we bought in 1989, very early on (brown carpet covered beautiful oak hardwood from the previous owners) as I was transitioning them to be inside and outside cats on our quiet street. I'd put the chair in front of the door and they'd sit for hours together. The neighborhood thought the cats on the chair were a circus attraction.

For many years, my Xmas tree was exclusively decorated with ornaments I'd created. As the time, I loved stitching samplers, so combining elements for this 6" stocking truly defined me. I designed a pattern for precious Jell0, on the left who towered a bit over tiny Sad!e on the right, permanent reminders of and tribute to our little family. 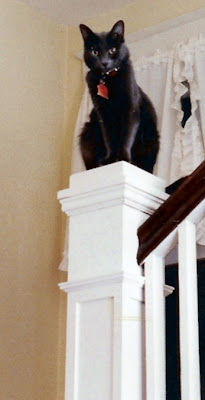 Another one of her favorite places. 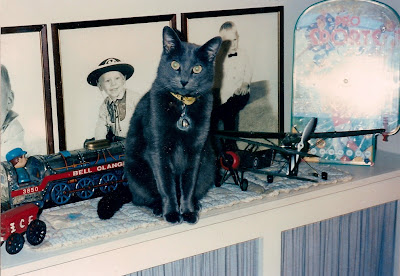 Our house had beautiful radiator covers and Sad!e commandeered this one in the living room.

I had hand quilted the runner - should try to find it as it is still covered in her. That's a dapper ex pictured in the background and various antique toys scattered about. I got the pinball game on the right for my eleventh Xmas. One of those planes was my grandfather's. That was our decorating motif: antique toys, i.e. junk we could play with. Yeah, we decorated with toys and cats.

For many years, people would comment that we needed to have children and I would reply that my cats satisfied my every maternal instinct, as I didn't have my son until I was 35 and married 11 years; Sad!e was 9 when J was born. Before him, these pets were valued children who did not require babysitters. 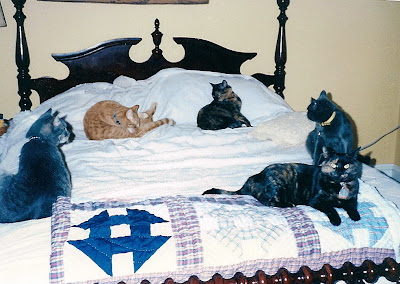 This was the rare 'five on one bed' maneuver of one incarnation of our cat family. Some of the kitty competition: Bob, a manic Manx; Moe, after Jell-a-mo who'd gotten hit by a car and a XL scardy cat; Callie, the mother to Sallie and Moe who had the sweetest kitty voice imaginable; Sallie, intense, beautiful, clingy, and clunky; Sad!e, seething at Callie, whom she hated.

Fast forward through years I don't have scanned, Sad!e wore that same yellow collar for probably a decade. Finally a mischievous toddler took it off. Although the lining was felt, it wore away the fur around her neck, so she had a permanent bald strip.

J's aliens, Sad!e's bald neck from her yellow collar.
Last June, when I contemplated our summer travel and feared me or a caretaker misplacing our deaf cat, I got her a pink collar with a pink disc identifier. This tag was no ordinary tag, as both sides were engraved with four lines each, packed with everything anyone would ever need.

On the go last summer: she'd become enthralled with the outdoors again and I allowed it due to her new labeling. We would often take her for walks around the neighborhood and I began having to watch the door so she wouldn't sneak out. Notice her tail held straight up, the ultimate sign of kitty happiness. You can also tell between this and the chair picture, above, that she had prissy, slender legs with very flexible feet, which combined to give her gait a frilly, dance-like quality, almost like she glided on her toes.

The new pink collar came with a little bell, handy when seeking a deaf cat. It was so familiar, hearing the clink of the bell and the metal tag, even though it hasn't been that long since she began wearing it. I came to identify it with her and would listen a little more acutely when I would hear the first jingle as I waited to figure out where she was going.

Since beginning on Fancy Feast a year and a half ago, she'd often carry around a bit on her mouth for later. She never had hair in front of her ears and it seems more obvious in some pictures.

A peaceful moment in January. Deaf cats sleep very deeply, many waking startled and mean when frightened. Sad!e's disposition wouldn't have allowed that; she never hissed or scratched.
She'd groomed herself less and less over the years, finally depending on J and I to keep her coat smooth, something you can tell we did with varying regularity.

The last time Sad!e woke me up yesterday morning, as she and her pillow-hogging, sneezing ways woke me often, was the sound of that bell. She'd gotten down from the bed, gone to the bathroom, jumped on the commode, and onto the counter in order to drink some water per usual; that's when I heard the bell, after she was at her destination. She wanted so much to live, still doing all she could until the end. Not long after that, I'd carried her downstairs to her favorite window, but when I returned home after biofeedback, she's climbed back upstairs and onto the bed. By herself.

Tough, persistent little kitty. She loved our bed until the end.

I weep goodbye. Her head, usually bowed in anticipation, is instead bowed in simple exhaustion, waiting for me to kiss it yet again.

Sleep, My Pretties. You'll always be my babies.

I slept with her collar clasp in my hand last night. When my son returned from visitation early this morning, he snatched it up and slept with it until it was time for school.

We still feel her so much.

Per my son's wishes and ex's willingness to pay, Sad!e will go to a taxidermist. I didn't really care one way or the other, but this evening I had a change of heart. She's been in the refrigerator and the taxidermist said to get her in the freezer. I decided to look at her during the change over and she looks absolutely beautiful, so peaceful. Kissing her felt like normal and filled such a need. I think I'd like to be able to kiss her in the future, too.

Completing this life cycle post, picture below of a gorgeous, happy, loved dead cat who the veterinary staff did justice by wrapping in a very special blanket....

This was such a beautiful tribute to your four-legged family member. I feel honored to know just this much about her.

Cricket,
I am sitting here with my eyes
filled with tears and my heart
hurting.
I am so sorry for your loss.
What a special cat.
_Melissa

I really need to start carrying mascara in my purse.

It's easy to see just how special she was to your family. Nineteen years is a long time, yet not quite long enough.

I'm so sorry for your loss.

That is a wonderful way to remember your furry darling. Hopefully you have J this weekend to keep you busy and also to help you get through the first few days.
He is so freaking cute!