Thank you so much for your thoughts, comments, emails, and cards. It really means a lot. We lost a member of the family and you understand. I especially appreciate Karen's sentiment: 19 years is a long time, but obviously not enough.

I have one more post about Sad!e beyond this one. It gives insight into what she saw me through, if you don't know about my tortured life. She was the one abiding influence throughout my adulthood and she spent it on my lap.

I wrote the following yesterday and you'll see why I hesitate to post it.

Nowadays, I cannot separate the idea of spirituality and religion, as they both speak to something higher that I do not feel. In single's ads, there are often separate tick boxes for each. Sometimes the non-religious, yet highly spiritual, think they have something in common with me, but it is quickly evident that they don't. I have no affinity for any of it.

Back when we were together, ex and I used to comment, "Sad!e knows." She had this wisdom about her and I'd secretly wondered if she was a reincarnated human. She was uncanny.

Speaking of uncanniness, something strange happened here yesterday. I cannot rationally explain it, so I won't really try to be logical. I need to record it, so I am.

The night Sad!e died, I spent until the wee hours at Ted's. Around 4am Thursday morning, I crawled into my own bed, Sad!e's collar in my tight fist. My stiff neck doesn't like high pillows and I was using the edge of a pile of three, the same Sad!e had been using all week. Even though she wasn't there, of course, I think I didn't jostle them to flatten them out of habit, a respect for her.

Lately, she really seemed to like facing the fish bowl on her pile of pillows. Maybe it was the light, maybe the gentle movement of Janie Betta. 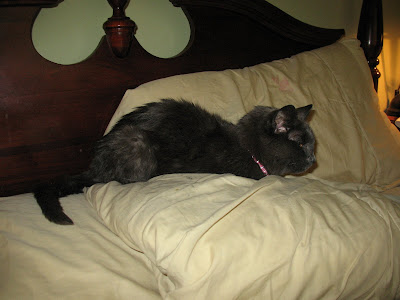 Here she is on Tuesday, except the pillows are too far from the fish bowl. Please excuse the cat boogers and Vitamin B12 stains.
When my son got home around 7am Thursday morning, I gave him the top pillow to sleep on as he feistily grabbed Sad!e's collar for his own fist. I slept on the edge of the remaining two. Around 8:30, he got up for school and I piled the three pillows back together.

My goal for the day was to wash the crusty sheets, but I could not bring myself to do it.

Mid-afternoon, I decided to lay down until J got back from school. It was around 3:30, 24 hours since Sad!e died. I pulled the top pillow downward to finally adjust it for myself when I realized it was wet on the bottom. It had a circle of wetness about 3" across toward the center back edge. I looked at the next pillow down and it was even wetter, with the same circle that had abutted the top pillow.

The moisture went no further downwards or upwards. It was a pocket between the two pillows.

It smelled distinctly of cat pee.

When he got home from school, I showed the pillows to J, matching up the circles. They were still moist, although they did dry completely a very few hours later. When prompted, he said they smelled like cat pee.

As ill as Sad!e was, I had marveled at how she never had any urinary accidents, in particular during the stress of that last week. Even if she had, there's no way these spots could have remained wet for over 24 hours between when we took her in and when I found them, especially because the pillows had been apart and exposed to air. J had the top one for several hours and the pillows definitely didn't smell of pee before that. My bionic nose would have picked up on it.

My brother frequents my house because he was the most comfortable there when he was alive. Why would Sadie be any different?

There's no part of that that isn't completely rational and believable to me. Bless ya Sad!e, where ever you are.