Off to see the Wizard 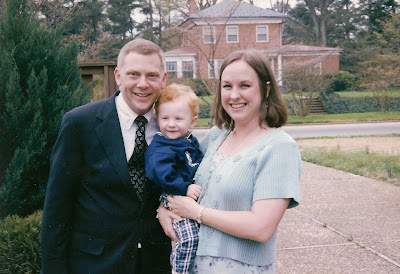 Back before he was two, J really looked more like his dad than me. I remember being shocked at the turn around two years later. This was taken in 1999 as we visited our old church at Easter in the little town we lived for 10 years before coming here 10 years ago. I was an SIF virgin. I still believed in god. My, how times have changed.

I had just completed nine months of continuous weight loss each and every week; we had a weight loss loop from around the country and I was very strict, pridefully so. I lost about 25lbs and that weight is about 30lbs less than what I weigh now. The weight in the picture is my goal. It's about a size 12. Reasonable.

Ex leaves today to drive to where he must report. He doesn't know how long he'll be there or where he'll go after.

He came by yesterday for some parenting business and I must admit he looked a bit dashing in his uniform. (Picture later.) He is still absolutely dumbstruck about going, but said he's fine with doing the time. The part he's not okay with is the lack of retirement. Maybe I'll explain that more fully later.

I learned that his powerful buddy had talked to the guy controlling the deployment list, a job the buddy used to have, and the list guy was going to give ex a bye. All ex needed was his current boss to sign off that he's needed at his military-oriented government job. His boss, a Marine COL who has never played war and is only biding time, said he flippantly thought it would be a good experience for ex, so he would not sign.

Powerful buddy queried ex as to the exact spelling of the Marine's name. I have a feeling something special will be coming his way.

Last time ex deployed, we thought he was going to Bosnia, but it wound up cushy Germany. It was really scary not knowing. Almost to the day, it was 11 years ago. The next day after he left I realized I was pregnant; J was born 10 days before his father returned.

This deployment makes me long for that innocence, wishing I could turn up pregnant tomorrow. Not by ex, just by somebody. Besides that and a dread of how J will react, I don't feel anything for ex. Although I am periodically still angry about old things with him and, on the flip side, I can consider him a friend who makes the daily phone calls he couldn't while married, I don't have strong emotion about him leaving. He's not mine, I don't want him, I don't love him.

It's better than the stormy years, though, when all I wanted was his life insurance money. At present, I sincerely hope it doesn't come to that.
So Churped the Cricket at 1/17/2008 08:49:00 AM

I think J's a lucky boy, to have a mom who works so hard to keep his Dad in his life and who puts her own feelings aside so that he can enjoye the best of both worlds. You're a good Mom.

**Heavy sigh** Too bad cutting the ties that bind you to the father of your child aren't as easy to sever as an umbilical cord...
[speaking for myself as well of course] I know 'zactly what you mean when you speak of not loving him, but having to care anyway for your boy's sake...

I'm amazed by the place you are in this journey right now. I don't know if I could handle it with the same grace you seem to be.

J is a lucky boy to have you for a mom. Despite what his relationship with his father is/will be he has you.

Aw, J was just so adorable there! Put him in a kilt and you could have eaten him up without even having to use a spoon.

Ugh, good luck to the Ex. A few of my good friends are in the military and I'm always worried about them being deployed. Fingers crossed he'll go somewhere that's safe and "cushy" again.

You have some strength to be able to deal with the ex and try to keep him part of J's life. Much credit and respect.