When I was five, our neighbor took us to Vacation Bible School with her at her Nazarene church. I was hooked. As a result, I brought my family to church. They went in order to feed my need.

I distinctly remember learning about the Ten Commandments shortly after that. Whoever was doing the explaining kind of dropped the ball on the covet part. Until I was an adult, I misunderstood the meaning of the word. I thought it meant 'want' not 'want what belongs to someone else.' I think this is so ingrained in me that I still have trouble following through on a want.

I remember my first coveting failure, in which wanting a doll for Xmas wasn't actually a catastrophically bad thing. Last weekend when J and I went to the Toy Museum at Natural Bridge, I saw the object of my covet and the Ten Commandments lecture all came flooding back. I never knew anyone who had one of this doll, so it couldn't be an official covet. In fact, this was the first time I ever saw one in person. 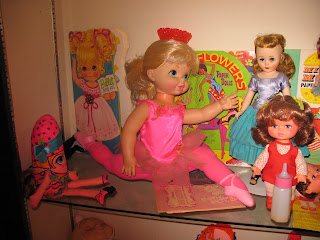 I risk life and limb for the picture where no flash photography was allowed.

I'm not sure if the doll pictured or the doll I saw on TV was a Dancerina or a Dancerella, but it doesn't matter. I wanted to hold her crown and make her spin on her pointed toe, just like I was on TV and supposed to do in my own ballet classes.

I learned covet at an early age and damn if I am not good at it now!!

I cannot think of any words I have problems with...too early.

You mentioning song lyrics brought up an old memory. When I was little, I used to think the lyrics were "hot damn, summer in the city", instead of the actual "hot town, summer in the city". The young KLynn thought that song was supremely naughty and awesome that they actually played "damn" on the radio. Of course, when I found out what the real lyrics were, it totally took the magic out of it. ;-)