Is the plural for talus tali?

I am finally at home on a Sunday, participating in Mel's Show n Tell again!

In looking out over the mountains recently, I saw many bald spots. All modern in my thinking, I thought perhaps they were shameful examples of deforesting gone bad. Or some kind of small operation mining. They almost looked like vertical beaches.

Finally from one of the overlook plaques, I learned that the rocky, bald areas are called talus. Apparently others call it scree and say it is loose rock found at the base of a cliff. Along Skyline Drive, these areas are not along the base of a cliff, though, so I do not think they came crashing down from the top of a cliff, breaking into small pieces, unless that cliff existed millions of years ago and left rubble until today.

After I read the description of talus at the overlook, I began focusing my camera on shots of more talus, or taluses, or tali. (?)

Okay, call it obsessing. One mountain, Old Rag, is pretty much named for its raggity talus appearance. Many others have talus blemishes and there were also lots of examples right on I-81, with no cliff in sight.

My story for the day is my new word of the month: talus. And I present you with plenty of examples. 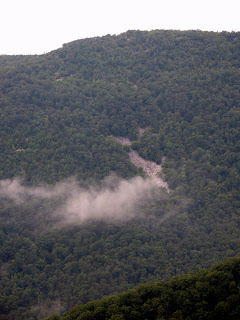 We loved driving the day we missed the rain, but we saw oodles of low clouds in the short distance. 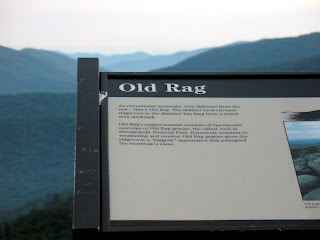 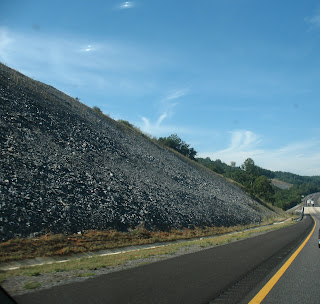 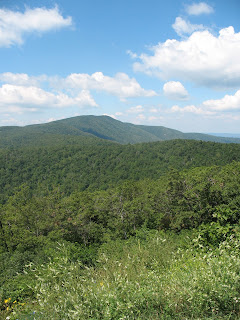 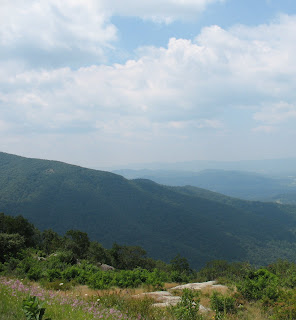 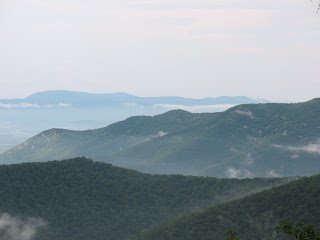 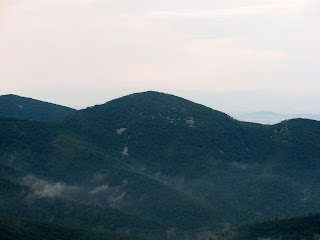 I absolutely love the information you give about the area you live in. I adore trees. LOL. Figures... I am allergic to them.

I had NO idea what a talus was. Thanks for sharing!

I absolutely love the information you give about the area you live in. I adore trees. LOL. Figures... I am allergic to them.

I had NO idea what a talus was. Thanks for sharing!

ACK! It double commented me. I guess we will see if it does it again.

Pretty pictures. I had never even heard of a talus before.

Great pics! AND thanks for teaching me a new word. Stop by my blog today and you can learn some new words as well... :-)

Those are very nice. I learned about tali today. (I will go with tali, it just seems reasonable and right). Very atmospheric scenery.

I learned a new word today! Let me at that NYT Sunday Crossword! Beautiful mountain shots, by the way...

Great pictures and you have inspired me to take some photos of the mountains I call home. Thanks for sharing.

Those are beautiful pictures...and thanks for the new word.

nr, I knew it's great for hiking, but didn't know about the climbing. Makes sense, huh?