If you can see

beyond the cuteness that is my son, isn't it amazing how much ex looks like Steve Mc.Queen? It's even more than the resemblance in this picture. 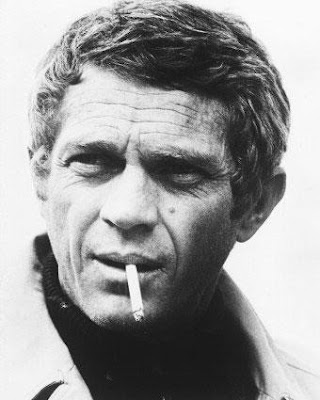 Oh, I forgot, I do have one other picture of him, back when we were a "happy" family.
[image removed]
Funny about life in the pre-digital age. I have to hunt for a picture of ex and my fucking computer is crawling with pictures of P. It's nice to have to hunt, meaning paper pictures are in an envelope or box somewhere and I'm not exposed.

As it is now and how often I'm in my picture files in Picasa, I see P (etc) constantly in small doses. When my hard drive failed last fall, the repair guy rescued all the pictures into one folder. At present, it still has over 6000 images in it. I weed through it constantly, tossing pictures or looking for plein air references or shots of paintings. Or old pictures of my son or grandmother. I had wanted to create all the old folders again to get organized, but that would take in depth looking at and sorting the images. Many, many are in dupe/trip, so it is quite a task. Although I've weeded a bunch out, a lot of these rescued pictures were from websites I'd visited. One in particular stands out - that website devoted to the hundreds of mothers' well loved and well stretched bodies along with many, many belly shots.

I hate those rescued pictures.

But I generally like ex now and dug around for ones of him for this. I finished doing his MP3 player this morning, has about 525 songs on it. I don't know why I am so fixated on his Father's Day, but I am. He's been good to me this year buying me the camera and a lawnmower, then supervising J mowing or doing it himself.

However, I did have to call him yesterday about something that concerned me. When J got home from his dad's on Monday morning, I noticed he'd had a nose bleed that dried inside his nostril. J balked that it'd happened (I don't remember him ever having a nose bleed before), then we began to clean and he realized it was true. Apparently, the baby at 22 months likes to bounce/sit on his head and will do so repeatedly, slamming down with her backside. He lets her. [It is kind of eerie, because he used to do that to L and she would not make him stop: "that" meaning up close contact from him sitting on the back of the couch behind her, not "that" in hurting her, just kind of scrunching/crushing in an unnecessary fashion.] It has gone too far at ex's. When I called ex, he said he told J to not let her do that, not let a baby beat him up (macho dad!), but ex let it slide and the sibling torture continued.

(Val, it sounded so familiar, but at least he pledged to not let it happen again.)

This morning, I gave J a little pep talk, that his job as a big brother is to show his little sister appropriate behavior. If he lets her do things that hurt him, he is teaching her that it is alright to hurt people. What if she did it to a dog and it bit her? She needs to learn what is polite and what is appropriate play. Yesterday, ex said she's the brute of the family, essentially with more balls than her 9yo half brother or her 16yo half brother combined. One usually thinks of the little sister as the recipient, but she is a dealer. If they let her, the dealing will only continue and get worse.

I'd upload a picture of her, but that's one face I do not have torturing me from the rescue folder. The way I understand it, inserting Steve Mc.Queen would cover her, too.
So Churped the Cricket at 6/05/2007 09:43:00 AM

Well, I must say that I think that J must have gotten his good looks from you. Though your ex is not specifically unattractive, J is so much cuter and more attractive than his dad, it must be you.

And I think you picked the perfect strategy in telling J to set a good example for his little sister. We're going through something similar with Bob and Boog. Bob lets him play rough with him, then he (Boog) turns around and hurts me. I've had to get on to Bob about letting Boog get away with so much. It's funny though, if Bob sees Boog doing something to hurt me, he'll really gets on to Boog and tells him that he *will NOT* hurt mommy.

*sigh* That's what raising children is all about, though: teaching proper boundaries. Sometimes we even have to re-educate the adults.

Good grief! Aren't you on vacation???

Until my son was 5, I thought J looked like his dad. It was some sort of programming of my brain from others. I remember one of ex's co-workers declaring to him, "You can't deny that boy!"

When I moved here after separating, I put out a few pictures, then added a new one of my 5yo son. Someone visiting asked who the little girl was in the tutu, because J looks just like her.

It was a turning point. I finally realized he looks like me and looks even more like my grandmother who just died.

Guess I have some more scanning to do.

Geez Cricket - that's a hot picture of you!

Little sisters can be and often are brutal. My daughter has kicked the shit out of the boy several times. He's too much of a gentleman not to tell me when it happens and often I discover the scars later. Grrrr. He won't fight back but he should defend himself - she shouldn't hurt him.

My 2 year old neice has 2 older brothers and she clobbers them often. She can hold her own with no problem at all.

Girls should be tuff but a little sister can take advantage of her big brother's good nature as well.