Updates of the season 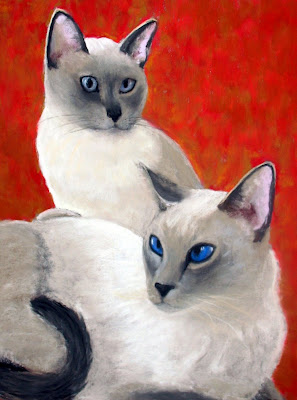 The eyes and chin of #2 are much better now. I added a tiny highlight to his left eye since taking this. I feel much better overall. Cat #1 still has too long a jaw, but it is just so Siamese looking, almost qualifying for Mannerism.

On Thursday, the eHar.mony date from last weekend asked me out for Saturday night. We'd spoken on the phone almost daily all week. On Friday, the guy who'd asked for my number at the EEG meeting finally called to ask me out for Saturday as well. Both were mighty late in the week to ask, but I guess #1 "won" out.

I do not know what to think of eHar. He is amazingly polite and perhaps too honest too quickly. We remind each other of each other, except he has some added features. He's almost 2 years a recovering alcoholic/pill addict. He's close to declaring bankruptcy. He's recently moved out of a group home into his sponsor's home. All this time, he's had a job and has wonderful skills in his craft, something I respect very much. Last night, I learned he'd probably been an alcoholic for 30 years, but he says his liver is fine.

He carries on meaningful conversations, has a good sense of humor. He complains of forgetfulness of late and already repeats himself to me. He commented that it is nice to talk to someone normal in the world, that he is around people like him all the time. He asked if I wanted him to stop telling war stories and I responded that he seemed to want to and I would appreciate it, too. That's what I've noticed about the recovering that I've met/dated; they cannot leave their past glories in the past and move on. It must verbally be regaled at every opportunity. Further, apparently he'd been abused as a young child.

My brain explodes with the complications. Cute in a very geeky way, he's truly a nice guy who's had some hard knocks, but can I base dating him on what I see in the present? Can't I get a break in this realm? Can I date someone more hard up than I? Remember me talking about throwing out the baby with the bathwater, that maybe it's a good thing? Yeah.

I don't think EEG meeting guy is my cup of tea, either. I will jokingly put on a Southern accent and say things like "ain't," but I never say things like "he don't" and I want to slap myself for being judgmental of him.

But if you aren't judgmental some how, can any opinions be formed or decisions made? He wouldn't tell me what he did for a living. Shade of Ted and honesty and he reminds me of P somehow besides just the height.

I am reading The Surrendered Single and it is helping.

I progressed on the refi on my house last week, as in I started it. Monumental for me. I checked with my bank and using them I have to submit almost nothing - divorce decree and proof of insurance. I sign one thing next week, then wait for the appraisal. Because I now have FHA (somebody explain about the interest due dates for them and if I should get some sort of refund), I want to close before July 21-ish. That should be possible.

Then I'll be right on ordering EEG equipment, software, training, and lap top. I couldn't be more excited. Anybody know of a good computer outlet besides Dell?

All my bills will be paid off, to include car. I am going to trade this @#$Mother%$%Fucking^&)% car (I plan to go to that dealership again this week and make them make good on the peeling front bumper b/c I don't want to be docked on it in a trade), then get something lateral price-wise, even if I have to go back a year. Anybody drive a Hond.a El.ement? They have so many accessories and are great for camping, even if they're funny looking.

I found a guy online who will buy my engagement setting. I will ship that and misc scrap gold out to him next week.

J comes back in the morning and starts golf camp. I go for a repeat visit to my podiatrist in the afternoon - my feet are much better, but not all the way. And I start my colored pencil class tomorrow night. Tuesday morning I go to EEG and I will deliver the painting. Then Tuesday night, J has a cartooning class.

I've been cleaning and rearranging furniture. Although I am spacey and unfocused as hell, something has clicked and I am getting some stuff done.

Summer has finally begun and we have a lot to look forward to.

You always have so much to talk about! Well, sometimes only a lot of talk about something. What's the difference, either way it's better than me. I think I may begin to get a reputation for contemplating my navel and saying little about it... Nummm...

Just consider me the Seinfeld of blogging - so little going on and so much to make of it.

At least you posting quotes makes you look esoteric!

Hi, just popped in from someone else's blog (um...I don't remember who's now!) Sorry 'bout the dating game. Love your painting. Immediately thought of the Disney film, then scrolled down to your past posts and of course, there were those lyrics!

Welcome Tracey! Always glad to have a new reader. Come back anytime.