Alone, either the picture or the copy, would have been too good to be true. Together they are a goldmine of (inappropriate? you tell me) laughter. 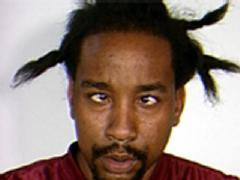 MINNEAPOLIS -- A man was sentenced Wednesday to five years probation for robbing a woman of her keys and cell phone, then licking her toes.

Carlton Jermaine Davis, 26, was warned that he faces 21 months in prison if he fails to complete his probation.

According to a criminal complaint, Davis approached the woman around 1 a.m. on Sept. 9 as she was leaving work and forced her to put her phone and purse inside a bag.

Did you find this on Fark??

I swear, just when you think you've seen it all...

It's got to be from The Onion. Right?

This actually came from a local tv station's website under their 'news of the wierd' section. It came out probably a week ago, but I could not get the image of this man out of my mind.

thank you Cricket,
I always need a good laugh.

I researched it some more on Google. There are lots of news outlets with the same story, but very few using a picture - for example, a Twin Cities tv station: http://www.kstp.com/article/stories/s339044.shtml?cat=1

That's freakin great! The picture, that is. I'm completely sqicked out by the toe sucking.

The funniest robber thing I remember involving bank robbers was the Homer Simpson Bandit. This was a few years ago. I think it was in the Canadian maritimes.

The police described the bank robber as a man who looked like and sounded like Homer Simpson.

Not only do you have to imagine a real man looking like that, but imagine some guy who apparently went around going "D'oh" and "Woohoo" all the time and had that silly cartoony voice.

I think they did catch him.

This guy just gives me the creeps. I don't know if I'd ever recover from having him suck on my toes.