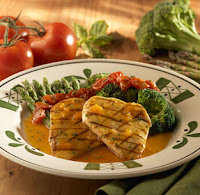 This is a new menu item at Ol.ive Garden. It is considered heart healthy or something. I even ordered it the week before I started my diet in anticipation of my diet.

The problem is that the photo didn't accompany the description and the description was incomplete. I thought the sweet sauce would essentially be a glaze on the chicken, not that it would cover the whole plate and saturate the veggies in a sticky, gooey, overwhelming mess.

I expressed my opinion to the waiter and he said I could have ordered it "light," meaning with just a little sauce. Of course, there was no way I could have known.

With it being a new dish, I figured that the great Ol.ive Garden in the sky might like the feedback, so I filled out their form online, saying the sauce was good, just overdone. Imagine my surprise when an email arrived saying I would be receiving a gift card. It arrived last week to the tune of $25! The dish only cost $13. That's handsome.

We went to the restaurant again on Monday. J got ziti this time instead of buttered ravioli. (He didn't pronouced it zee tee, but more like zitty, as if full of zits. Ha!) I got the mixed grill, which had good things on my diet: steak, chicken, roasted potatoes, and zucchini. When I offered a roasted potato to J, he took a bite and said it tasted exactly like KFC. Then he looked embarrassed and said, "I doubt if the chef would like hearing that. His potatoes taste like KFC."

I didn't know he'd know what a chef would care about. Hurrah for Ratatouille. And hurrah for gift cards.

PS - As of yesterday, I'd gained a pound from the week before, although during the week I'd lost. Go figure. It's something physiological, like hormones or salt, so I'm not going to sweat it too much. I behaved well all week except for three potato chips Sunday.

ETA: I weighed myself today and I was back down 1.5lbs to what my low point was last week. This is crazy.

PPS - ex still doesn't have his orders, so he's stuck with a crowd of guys not doing anything since last Friday in a typical Army hurry up and wait. He thinks he'll be going to the post where his specialty's school is for a three week catch up course. It is located where we used to live and where he used to work, only a few hours from here. He'll probably be able to come home on the weekends.

PPPS - I think J's report card will be coming home. I am expecting all As, except maybe math in which he failed the first test of the quarter. He told me yesterday that a kid in his math class who was moving was saying his goodbyes and called J "The Brain." It really seemed to shock J, but it made him proud, too.

I think J is like Eli Manning personality-wise. He's kind of quiet and bumbling, but still confident. He's not a public speaker. He goes about his work and bad stuff slides off. Maybe I have realized the basis of my fascination with Eli. As my mother said of J, "He's a lover not a fighter."
So Churped the Cricket at 2/05/2008 09:13:00 AM

I love The Garden, I think the last time I ate there was for my birthday and my friend treated me to lunch.

The Brain! That's great, and great that he was pleased.

Olive Garden is awesome, but I'm glad I read your review of that dish before I ordered it. It sounded like it could be awesome or gross.

That dish looks delicious. I am currently NOT eating any sugar, so I guess I would have to do it without sauce at all.

Bridge,
I was thinking like you....the veggies look great...hard to get good veggies and I'm always looking for veggies at restaurants...but I don't eat sugar either....I would order it without the sauce as well.

I'm not sure how I'd like that sauce. I heart the Olive Garden and really wanna try this new ravioli thing I've been seeing, but I can't get Greg to go with me. He sucks. We were supposed to go for my birthday, but I got sidetracked by something and he took full advantage of that. (In his defense, the last couple times he'd been there, he got really sick. I was with him and was fine, but it's hard for him to shake)

"The Brain" how perfect.

And yay on TOG for rectifying your bad experience!

i once read somewhere that NO dish at the OG is under 1000 calories, even the healthy ones.

can you confirm or deny that?

I hate when restaurants ruin the dish by drowning the entire plate in sauce. Coming from a culinary background, it is one of the worst things a place can do.

jess,
I think portion control is the thing. When I got the mixed grill, I automatically divided it in half. They really do serve a lot of food for the money.

What surprised me about the chicken dish was that the whole thing was essentially sitting on jellied preserves. It seemed contrary to the goal of the dish. That one, I didn't divide it, I just didn't finish it. I did eat all the veggies, trying to scrape off the sauce. The whole thing was an odd combination.

brite,
I don't blame Greg in the least. If you go, order the same thing in a show of support!