I cannot say enough how much I liked this NYT article, When Should a Kid Start Kindergarten?

First summary: I am right.

Theme summary: later is better, even for the ones academically advanced. An old term applied in a new way, the phenomenon is called "red shirting."

The reasons they gave for starting later, for example, intellectual or emotional immaturity at the front end or prospects for doing better in sports or scholarships toward the end, were not in my mind when holding back my son. I wanted to give him an extra year of childhood. I also wanted him to enter college a year wiser so he'd make better decisions then about choosing his college, his major, and his drinking patterns.

Little did I realize that his reading, spelling, and writing issues would hinder him even as he started late, although he's completely on par and probably ahead now. School is easy. Homework isn't a struggle. He was recently chosen along with one other boy from his class to attend a special after school thing for bright kids. Most of the kids there were from the gifted program, something J just barely missed.

(Although being in the gifted program would look good on paper, I think the confidence he gets from being at the head of his class would be much better than struggling with the rigors of the gifted program. The increased homework would be a nightmare, although I have complained this year that he hasn't gotten enough.)

I've often thought about what it would be like if he were a grade ahead and I think the pressure he'd feel would be comparable to that he'd feel if in the gifted program at present. If he had gone on time, I fear he would have gotten behind in reading and it would have destroyed his confidence. As it is, he knows he's one of the brighter kids in his class and that success breeds more success.

I've seen it in a related realm. Used to be, doing one of the involved book/country/history projects overwhelmed him. Now, he knows what success he's had and knows the work involved. Without prompting, when talking during the project presentation, or even practice for it, he suddenly projects from his diaphragm and the quiet boy turns into a confident public speaker.

Recently, he did a project on his own at school creating a kid's information newspaper about a civilization, complete with data, pictures, captions, games, and puzzles.

He did a country report on Greece in the second grade and that knowledge has been handy in his ancient civilization studies in third grade, too. 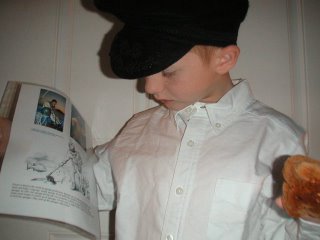 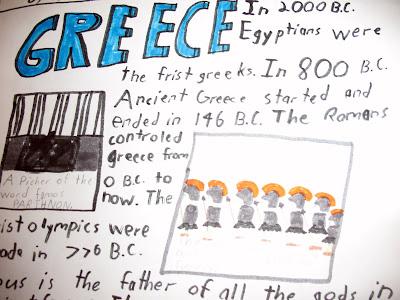 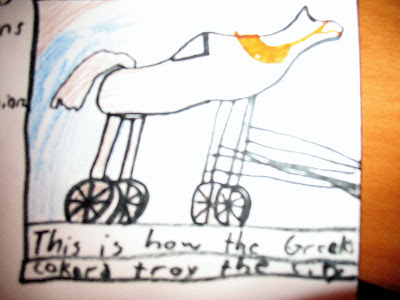 cokard = conquered
He's very good at the phonetics of spelling.
I think it is "troy the city" vs. just Troy probably because his grandfather is "Troy the man." 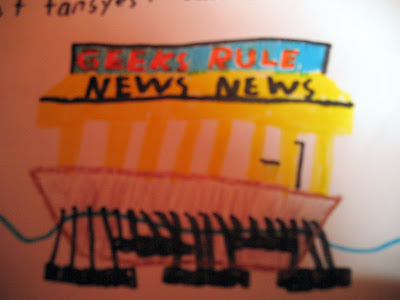 I love this misspelling: Geeks Rule. He thought the News News part was very clever, as if the first news was part of the name, Greeks Rule News, and the media outlet is called News, too. Humor of redundancy. 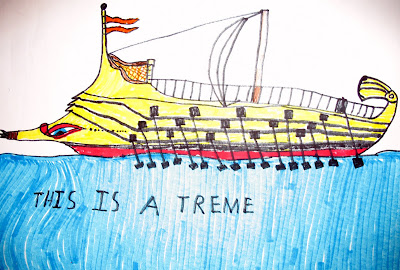 His detail and artistry never ceases to amaze me. This is the entire back page of the four page creation.
I just don't think he would have this ability if he were up to a year younger than all his classmates.

His test scores should arrive this summer. We worked hard on our reviews. I'm curious if he'll do as well as we anticipate.

As an aside, WaPo has an article today entitled, Scores Up Since 'No Child' Was Signed (I won't link there directly b/c I don't want them to link here), and the report was done by an impartial group. It is a good read.
So Churped the Cricket at 6/06/2007 09:50:00 AM

I taught third grade for several years, and the students that I saw struggle were the ones that should have started later - mostly boys. Kindergarten should be all about success for the child. Many of them are not ready to be there at all.

Cricket,
You are truly blessed with you son.
I am a little envious.
My two boys have autism, one is severe and cannot talk and one is mild-mod.
I would be thrilled beyond words to have that work be done by them,
as you are.
But, you deal with what is given to you and go forward. Onward for me, I suppose.
_Melissa

Melissa,
You are a sweetheart taking the time to comment. He is a great kid and it is fun seeing his projects, but a mother's love is a mother's love no matter the output. I wonder about you each time you comment and hope that you three are coping well, living well even.

I forgot to say that I was also impressed with his choice of Greece. You know how much easier life is when you choose the same book again for a second book report another year? Or your science project double dips for both biology and chemistry requirements? He was quite wise to choose a topic he already knows and finds interesting. I like that kind of foresight.

The boy just graduated kindergarten on Monday. He's 6. When they "tested" him last year to see if he should go to junior kindgarten or regular kindergarten, I was a bit disappointed when they said they were putting him in junior. I think he was ready to go to regular kindergarten as far as his intelligence, but it seems they thought he wasn't up to par emotionally as well. The reason for marking him down on itelligence? He put the nose in the wrong spot on the drawing he did of a man. :-/

your little boy is awesome...I love the picture from the "reason" post today too.