This word provided by Tara perplexed me at first. I'm not so crazy about the family I was born into. They don't give me warm fuzzies, plus I woke up in a bad mood for some reason. So I'll just be snarky. 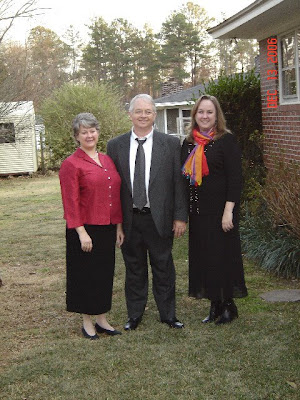 With my sister and my father at my grandparent's house after my grandfather's funeral. I really didn't want to be there. My sister showed her butt in the days before and never tried to make right. Her hair started turning very gray before she was 35, so she colored it last I'd known. I was surprised to see this natural version and I must stress to you that I am the big sister by 2.5 years. And I do not color my hair. heh double heh (Remember at the football game last fall, someone mistook my sister for being my father's wife?) 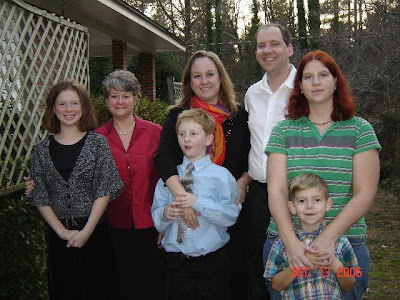 With my sister and her daughter as well as two of my three very odd cousins, plus the youngest's son, after the funeral. It was the first time I'd been back down there in over five years. 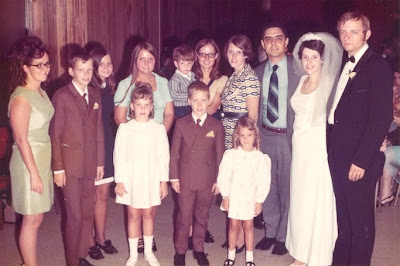 Here's the wedding of my mother's first cousin around 1970. This is a picture of all the grandchildren. My younger sister and I were the only great grandchildren at that time. With my grandmother and mother reproducing young, shotgun style, it gave us quicker generations. My mother is far left and her brother is third from the right. The boys in brown are the sons of her youngest aunt and they were closer to us in age, although a generation apart. The littlest boy is an oops baby the same generation as all his sisters. For the record, that's the pretty, petite version of my sister she kept until her 30s. 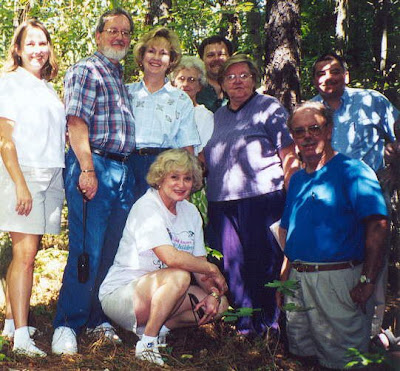 This extends the reaches of family, a group of genealogists studying the same families in the same counties. Here we had a reunion and went grave hunting in the woods. Most are related many times over to ex, but some are related to me in the manner that ex and I were 9th cousins. More closely than that, the lady bottom left is my father's first cousin, who mostly researches her husband's family with these folks.
Her daughter, my second cousin, was my age, but never gave me the time of day. I was smart and popular in school, but she always acted superior. And she had huge boobs. You may have noticed my sister's boob in the pictures above - well, keep in mind that is after her breast reduction. I remember the best man at ex's and my wedding (a guy I knew for years as well and was in out class at school) saying, "Your sister has the biggest boobs in Dogville County next to Amy McNair." To which I had to reply, "Why, Chip, didn't you know Amy and I are second cousins?" While his eyes lit likeXmas trees, I am sincerely happy with what I have compared to that. 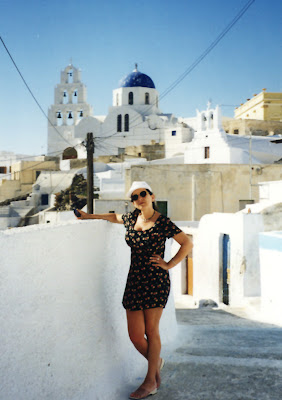 This is my cousin who contacted me from Greece. She is a second cousin once removed and she provided me extensive genealogies of the family in Greece. My great grandmother, the eldest of five, was the only one to come to America and the remaining family was so glad to hook up with us almost a century later. This cousin was the grand daughter of the youngest son. For the record, I am guessing that big boobs run on that side of the family, too, but I am not being snarky about her. She was very helpful.
And that is some dabbling in some of my living family. I have so many old genealogy pictures, but chose to not go those directions. Hmmmm. Maybe it would have been a more positive post if I had. As I always say, my family is bigger than the idiots who happen to be living at the same time as me.
I'll close with the only family to me who really matters: 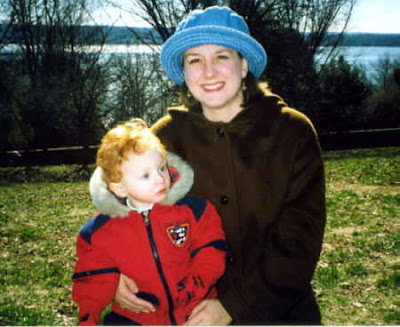 You look so beautiful, dude.

Becky said it first but I was thinking it sans "dude" and including your also beautiful son.

You did very well with the subject word this week, despite the fact you are not fond of the word.

You always do so well in the scavenger hunt. I am so glad you joined this little "family" of players.

Definitely love that last photo. My mom dyed her hair brown for the longest time, up till a few years ago, and then decided to let it grow out and let the naturally silver hair come in. It took awhile for my nephews to get used to, but it looks great.

I LOVE the last photo.they grow up too quick, Cricket.
My boys are 12 and 13 now and I want them as toddlers all over again.
Did you see the man yet or not???

I really enjoyed this post, Cricket. The photos, of course, and especially the stories that went along with them.
I have never researched my family at all. I barely even know my parent's families!