I'll post today, then back fill for the week. I'm kicking myself for not taking pictures Monday and Tuesday, so I'll have to actually write for those days!

My son had a blast. Despite him not going to any of the Kids' Club activities, he wrote in a kids' questionnaire, "This was the best vacation I have ever had." His favorite was snorkeling in Cozumel, which was actually rough going in relentless wind and waves.

(I was unlucky that my snorkel leaked and, for the first of two stops, I was just doing my best not to perish in the nasty waves - I remember calmly thinking once, as salt water went up my nose and in my mouth, "Oh, this must be what it feel like to drown." Better me than J, though, with the faulty snorkel. That second half of snorkeling, although it was just an ugly plane wreck site, was the best 30 minutes of the week. I love the peaceful sounds of snorkeling. The first site, which I struggled to see, had the most fish - many rather friendly, great variety - than I had seen at either Grand Cayman or Roatan. It was beautiful. The only other thing I didn't care for was having a guide insist we follow him. I've always been allowed to float and do at my own speed, without 15 someones and their flippers in my face. I definitely prefer the freedom. We had two underwater cameras, which I'll get developed digitally this week. I didn't spot any nekked behinds this time, but the photographs will tell.)

Many, many people on the cruise ship were seasick several days from the weather, but we were lucky. The weather was cool, but it wasn't cold for either excursion. It did rain a short while at Progreso on Thursday, but the timing worked out well.

I am still rocking as I sit at my desk and will probably rock in bed for a week. I've had a hard time finding my land legs, too.

Okay, I am avoiding talking about my mother. Much like the "lost" passport, she seemed to revel in making simple things difficult, casting her insignificant, easily remedied problems on others and making them the business of every one else. Just this morning, her ignorant approach to the airport cost us six circles of said airport, adding up to at least 15 or 20 precious, pre-dawn minutes, and put us within the one-hour-before-the-flight rule; I paid extra to check in late at the curb and thankfully they took my money. She insisted upon going to the airport post office on the way in, yet she didn't know her way out of it. She could have just gone to the post office on the way out and not potentially cost anyone a flight. She is her own priority. It was just a couple of Netflix.

She is so self-centered that it is mind boggling. She generates stress, but I held my tongue. Several days before, while we were still in FL, I told her that she was plucking my last nerve and I do believe that warning applied for the whole week. I have begun to wonder if the senility that hit my grandmother late is hitting my mother early. Her avoidances of simple things is in overload, or it makes me overloaded, anyway, when it is something that influences me. That she is always growling or grunting or sighing or scowling doesn't help. She is an attention hound, always 'look at me' or 'serve me' - she drives me mad. That she dared to sit in a chair behind me when I finally got the computer away from my son at her house Saturday shocked me; she made no bones about peering over. That she listened in to a phone call to my doctor (I needed two scripts called in down there) and dared to question me about details afterward slays me. She has no sense of privacy, no decency. I cannot tolerate her company. Used to be, I could put on my "daughter hat" or "tour guide hat" and let the rest roll off. I couldn't do it this time. She was entirely too close. I had no escape, but then I felt that before I arrived, so her presence is far reaching.

Well, I had to get that off my chest. Now it goes behind me, I hope. Next: cruising fun! 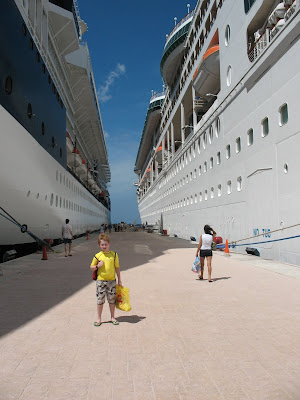 Welcome back. Sounds like you had a good time. Hope you have a lot to show from the trip.

Welcome back! Sound like a fabulous time with the boy.

As for the mom thing....are we related? because your description sounds eerily familiar to me....

Welcome home! Isn't it glorious to be home?

welcome back! missed you.

Nice to see you again :-) Sounds like the trip was wonderful, even with your more...trying...travel companion.