I feel better today. I think yesterday was, in part, due to the lack of Lithium. I was out Tuesday morning, went to fill a new script that evening (I hate when refills run out - they are so easy to call in) and Wally's said they were too busy to fill mine, that I needed to come by Wednesday morning. When I told her I'd have to skip two doses by then, the pharmacist didn't care. I said, "Okay, I'll be bouncing off the walls." The clerk replied, "Well, just don't hurt anybody." How inappropriate was that?

When I went back, in my anxious state, I completely forgot my .45! Doh! I could have hurt somebody! I was a little cranky, though - took it out on a few ignorant fellow shoppers for good measure. Made me realize the my strong desire to come off of Lithium is not realistic.

Because it necessitated an additional ride over, I had the bright idea to actually buy some supplies for the trip while there. I'm sure that's part of the pharmacy marketing strategy.

You know all the cute travel bottles? There's a whole bank of them at Wally's. Buying every version of them boosted my spirits yesterday. They are so much fun! I could roll around in a pool of them!

In addition to the usual shampoo, conditioner, toothpaste, body wash, hair spray, mousse, and lotion, I even got anti-wrinkle spray, a tiny first aid kit (this represents Cub Scouts on the brain), anti-septic gel stuff (in case the cruise ship crud comes calling), face cleanser, and a wee deodorant. I didn't know they had such a variety.

Speaking of which, I smuggled a bottle of vodka on our last cruise. Hmmmmm? Sure would mellow me against the mother attacks.

I received confirmation of our snorkeling trip yesterday, too. Procrastinating for some odd reason, I felt bad about waiting so long to make reservations, but I am relieved it worked out - pretty cheap, too. Barely over $100 for the three of us. 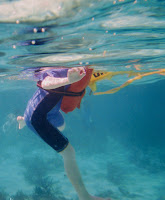 I also bought two underwater cameras at Wally's. I loved our sea pictures last time, but this time I will wait and have them developed digitally; I have very few scanned. One shot from before was especially funny. I was taking a picture of J, just his body, his head was above water (ah ha, I found the clean version), while we were on a snorkeling trip and he was too little to snorkel yet. In the background of the picture is this guy's bare ass, trunks under the cheeks. I have no idea what he was doing and had no idea he was there when I took the picture.

My mother has procrastinated on finding her passport. She swears it's in her garage in the outer pocket of a suitcase. Problem is it's not in the ones she's checked, but apparently she has more to do. She had a friend coming by last night to help. I told her we are leaving her ass if she can't find it.

I'm still working on finding us a tour for the other port. We probably want to see ruins. Seems that there's the chauffeured car version, totalling almost $400 for us three, or there's some smattering of tours coming from the ship. Generally, you do much better price-wise with excursions you book yourself, but we may not have a choice - which means waiting in a hugely long reservation line on ship the first day - the responsibility for that falling to me. Ugh. I can't find where this cruise line publicizes each ship's excursions. On our last cruise, the web links were laid out according to port and made decision-making really easy - I could cross-reference and find out own tours, too. With this trip, my fact finding is limited to what others have written in cruise and port reviews.

At Wally's, I also bought another data card and card holder/transfer thingie for on the ship. I might try to do a picture post or two from at sea. I know you'll be in Cricket withdrawals by Easter. I know I'll be in blog withdrawals well before that. Thanks for your support.
So Churped the Cricket at 3/13/2008 08:29:00 AM

Why use a pharmacy that has such an attitude? Seriously, you can't mess with crap like Lithium-skipping doses and such.

Have a blast! Can't wait to see the underwater pictures. Please try to get some good funny ones of people doing stupid stuff. HEHE.

It sucks. They're generally good to me, several times saving me the asthma inhalers that were going to become illegal last year per Al Gore's initiative on propellants.

I got there before 7 and they close at 9. Goes to show how busy they were. The line was a dozen people long and many others were waiting.

The main reason I go there is because I have no pharmacy coverage. I have a little discount card, but it only does so much. Without prescription coverage, I have to go where it's cheapest and Wally's is cheapest by far. They also have $4 prescriptions, one of which I take.

If I only had to worry about a $5-10 copay, I'd go to one of the four pharmacies within quick walking distance of my house. I don't have that luxury, so I guess I have to settle for being treated like crap sometimes.

What I really expected was 4 Lithium capsules, enough to tide me over for the rest of the script. That's what shocked me the most.

Dude, I also heart the teeny-tiny bottles of travel sized goo! I thought that I was the only one!

May you have a safe, fun, and Norwalk-free cruise. Oh, and make sure you have full bottles of all your Rx's to take with you. Nothing worse than bouncing off the walls while you're at sea.

Next time slap that pharmacist silly! What a jerk
And you mean no churping for 7 days of the cruise?
Oh no!
Perhaps, you need to rethink the cruise? ha ha

I think that it's possible that Wally's was acting illegally. And I would report the behavior of the clerk to management. That is beyond inappropriate.

I wouldn't have gotten over that comment for a good 24 hours. You seem to be able to keep your cool quite admirably.

Naw, I figure she's ignorant. I can't change that.

Plus I was still medicated when she said it, so I was cool. If it had been the next day, I would have potentially lost it.

Often times, saying things back just makes it as if you're proving their point for them, even if you do have a valid point. Delivery would have suffered. I do try to keep my crazy to myself.

How nice of the pharmacist...attitudes like that get people fired.

Well, you couldn't cure her ignorance, but what if she fucks someone out of an antipsychotic the next time and someone does get hurt? Honestly, I'd drop a letter to the pharmacy manager. Then again, I am the Grumpy Bipolar Avenger.

The primary thing is that I didn't need to leave the script there, I could have gone to a nearby (or any) grocery store (or pharmacy) per her suggestion. I told her that didn't sit right because all my other scripts are there. I honestly didn't want to run around extra come refill time. BTDT, learned my lesson.

I had told her that coming back the next day would mean I would skip two doses. I figured I could get four capsules out of them. She took the script to the pharmacist, got an answer of 'no' about filling it, and she came back with the news. It was then that I said I'd be bouncing off the walls (I was actually joking; didn't expect to be affected at all) and she said to not hurt anybody.

I could have taken the script back at that point. It was my choice to leave it. It was not her choice about not filling it. Except for her comment, she did everything right. It wasn't her fault they were busy. I didn't want to shoot the messenger. She did what she could inquiring with the pharmacist and suggesting a different location.